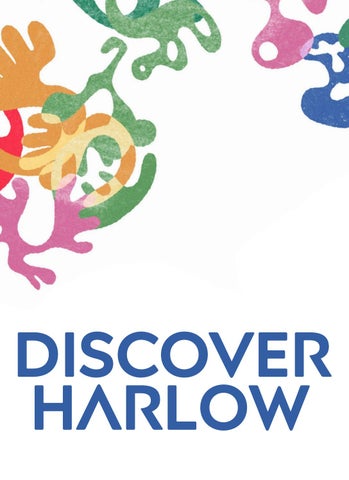 Harlow is a significant town in the west of Essex with a population of around 85,000. Over a third of it is green with some fantastic countryside, great rail links to London, excellent road connections including the nearby M11, and Stansted Airport just to the north. Harlow has a long-standing reputation as a hub for science and innovation and was the birthplace of fibre optic telecommunications technology. The town is growing with major housing schemes underway and planned, the re-location of Public Health England and the continued development of the Harlow Enterprise Zone. It is also well known for its fabulous sculpture collection and has London on the doorstep.

HARLOW IS POISED FOR EXCITING GROWTH AND DEVELOPMENT.

WHY HARLOW IS SPECIAL

Our new story explains what Harlow has to offer. It captures the spirit of our place and highlights what will put us ‘on the map’ beyond the reasons you might already know about. The narrative we use to represent this new thinking is unlikely to be seen by our ‘customers’; it is not a set of marketing slogans, rather it describes the very essence of Harlow. It will inform how we develop our “offer” through the way we communicate, what we build, the environment we create and the way we behave.

Whilst some elements describe our current assets and the way we are now, they also reflect what we want and need to be in the future; our approach is both aspirational and based on a reality that can be experienced today.

THE THEMES OF THE HARLOW STORY

Harlow was designed by Sir Frederick Gibberd the townâ&amp;#x20AC;&amp;#x2122;s master planner who was a visionary on an aesthetic as well as practical level and as a result you are met with the surprising and rewarding sight of awesome public art, especially the stunning sculptures dotted around the town. However, these arenâ&amp;#x20AC;&amp;#x2122;t just any sculptures and you can admire work by Auguste Rodin, Henry Moore, Elizabeth Frink and Barbara Hepworth; there are 84 to find and enjoy!

This permanent, free exhibition is a living gallery with installations across squares, precincts, public buildings and schools driving footfall to different areas. Whilst you can discover them via a sculpture trail there is something splendid about turning a corner and bumping into a Henry Moore!

These arenâ&amp;#x20AC;&amp;#x2122;t the only cultural assets of Harlow as there is an incredibly active community with many groups performing music, dance, theatre and so much more. The Harlow Playhouse hosts a range of performances to suit all tastes whilst also being a fabulous community asset; the Gibberd Gallery is a space dedicated to promoting the visual arts and Parndon Mill is a hub of creativity as a workspace for artists and craftspeople.

The sculptures form a natural thread across different places and buildings within the town. They offer an opportunity to link with technology, writers and performers to create â&amp;#x20AC;&amp;#x2DC;speaking statuesâ&amp;#x20AC;&amp;#x2122; which can tell their own stories linking content to mobile phones, engaging with visitors and bringing each site and the surrounds to life.

SCULPTURES DEFINE THE CULTURAL, CREATIVE AND GLORIOUSLY IDIOSYNCRATIC NATURE OF THE TOWN

However, they are also a modern reflection of the genesis of Harlow; namely the North and East End of London. Thousands of people came from that area to make up the new Harlow from the 1950’s onwards, and it is now a centre of art, design and creativity; this town could be viewed as the ‘original East’.

There is a fantastic opportunity for Harlow to link with London Art Schools, develop arts and crafts across the place and champion art and design from the 1960â&amp;#x20AC;&amp;#x2122;s which never goes out of fashion.

This will provide the opportunity to further animate the town, bring creativity to the fore, celebrate culture in every sense and be a real reason to attract and retain young people to live and work; hopefully many from London!

THE SCIENCE OF CHANGE

Harlow has science and innovation in its DNA. It was the birthplace of fibre optic communications which has shaped the way business operates; â&amp;#x20AC;&amp;#x2DC;what the wheel did for transport, fibre optics has done for communicationâ&amp;#x20AC;&amp;#x2122;. Dr Charles Kao pioneered the use of optical fibre which reduces the loss of information allowing masses of data to be transmitted over huge distances; this laid the groundwork for the evolution of the internet.

A reflection of the importance of science research and life sciences to Harlow is the phased relocation of PHE to the GlaxoSmithKline site in the town where there are already stateof-the-art laboratories and support facilities in place. This relocation will see ÂŁ450 million investment by the public sector. Public Health England, which exists to protect and improve the nationâ&amp;#x20AC;&amp;#x2122;s health and wellbeing will eventually have its science campus and headquarters in Harlow, employing around 2,750 people. Many of these will be recruited locally and there is already dialogue with universities, colleges and schools to ensure a future, trained workforce is available.

The successful Harlow Enterprise Zone has seen a substantial public sector investment which has paved the way for the start of construction work on a global standard, state-of-the-art data centre campus and Science Park. This is part of a public-private partnership which has already leveraged in excess of ÂŁ50m from the private sector with an ultimate investment that is likely to reach ÂŁ300m. The Enterprise Zone has the potential to create up to 5,000 new jobs, many of which will be in high level occupations.

As the town and area looks to â&amp;#x20AC;&amp;#x2DC;changeâ&amp;#x20AC;&amp;#x2122; as it grows and develops, the relationships it has with universities and businesses up and down the LSCC will be critical, as will putting learning and entrepreneurship at the heart of its growth agenda. This will ensure there are local jobs for local people, that a further science related supply chain is developed and the people who come to live in the considerable number of new homes can have a life and career in Harlow.

When Sir Frederick Gibberd, who is considered to be ‘Britain’s leading architect-planner of his era’, designed Harlow his aim was to create well designed communities, with good services and facilities whilst protecting and enhancing environmental quality. This noble aspiration is equally true for the next phase of Harlow as it looks to benefit from the ‘overheating’ of a crowded and unaffordable London.

There will be thousands of new homes in the area and this influx of new people will help transform the town centre and local economy.

A GREAT VALUE, BRILLIANTLY CONNECTED LOCATION THAT IS UNDER 30 MINUTES FROM THE CAPITAL CITY.

Harlow is an incredibly attractive place to live and that will only be enhanced in the coming years as the town centre continues to be transformed and further investments are made in transport, connectivity and facilities.

Most people are pleasantly surprised at just how green Harlow is both within the town and in the surrounding countryside. There is a choice of places to live including town centre apartments, estates and rural villages with a range of new developments underway including the Harlow &amp; Gilston Garden Town. This growing community will include a series of characterful villages with education, health and community facilities but is very much part of the ongoing regeneration of Harlow. The town will open up the countryside with a focus on healthy living, well-being and provide housing for one of the most economically productive and fastest growing areas of the UK.

There is so much to see and do in the Harlow area with plenty of leisure opportunities and sports on offer including the very popular rugby club, football club, Leisurezone and the network of cycle paths that criss-cross the place. Lee Valley Country Park is nearby with beautiful green spaces to enjoy, the canal is a fantastic asset to either walk along or sail and Town Park is a magnet for young and old alike with events and festivals.

Within the Town Park is the family favourite for over 50 years, Pets’ Corner which has a great collection of farm animals alongside more exotic animals such as reindeer and llamas. The area has excellent education provision; Harlow College has been designated an ‘Apple Distinguished School’ and is opening the Stansted Airport College in partnership with the airport offering courses in the aviation industry. With the opportunity to work and play in London as well as closer to home why would you consider anywhere else?

THE ‘BIG IDEA’ FOR HARLOW

The ‘big idea’ is an emotional and behavioural statement of intent for Harlow and sits above and alongside the themes. It projects what the place is about, what it stands for and what is important. This is not a strap line or marketing message rather it is a ‘strategic signature’ for the town and surrounding area.

Harlow is a place of fantastic opportunity with new investment, new jobs, new housing and new facilities. However, it knows it needs to grasp these opportunities and think much bigger, wider and more confidently about its future. With London to the south and Cambridge to the north it sits centrally within a growth corridor that has the potential to drive the next phase of Harlow as a place.

As it seeks to be more ambitious it is reaching out and seeking to engage with its neighbours, to create relationships and connect with places and organisations which can support and fuel its aspiration. The destiny of the town and area is in its own hands; every place has its time and this is Harlowâ&amp;#x20AC;&amp;#x2122;s.

FOR LIFE, LEISURE OR BUSINESS YOU TOO CAN MAKE HARLOW YOUR HOME.

Discover Harlow as a place of opportunity and investment. With some fabulous countryside, great rail links to London, excellent road connections – including the nearby M11, and Stansted Airport just to the north – Harlow is forging ahead as one of the most economically productive and fastest growing places developing in the UK.