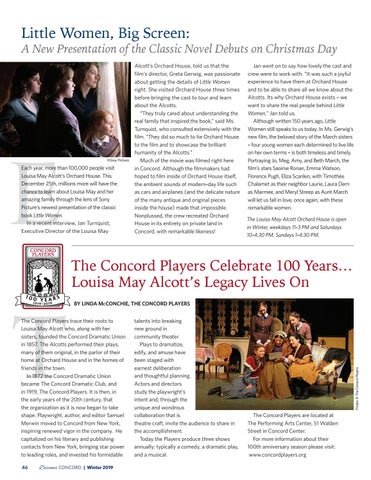 A New Presentation of the Classic Novel Debuts on Christmas Day

Each year, more than 100,000 people visit Louisa May Alcott’s Orchard House. This December 25th, millions more will have the chance to learn about Louisa May and her amazing family through the lens of Sony Picture’s newest presentation of the classic book Little Women. In a recent interview, Jan Turnquist, Executive Director of the Louisa May

Jan went on to say how lovely the cast and Alcott’s Orchard House, told us that the film’s director, Greta Gerwig, was passionate crew were to work with. “It was such a joyful experience to have them at Orchard House about getting the details of Little Women right. She visited Orchard House three times and to be able to share all we know about the Alcotts. Its why Orchard House exists – we before bringing the cast to tour and learn want to share the real people behind Little about the Alcotts. Women,” Jan told us. “They truly cared about understanding the Although written 150 years ago, Little real family that inspired the book,” said Ms. Turnquist, who consulted extensively with the Women still speaks to us today. In Ms. Gerwig’s film. “They did so much to tie Orchard House new film, the beloved story of the March sisters – four young women each determined to live life to the film and to showcase the brilliant on her own terms – is both timeless and timely. humanity of the Alcotts.” Portraying Jo, Meg, Amy, and Beth March, the Much of the movie was filmed right here film’s stars Saoirse Ronan, Emma Watson, in Concord. Although the filmmakers had Florence Pugh, Eliza Scanlen, with Timothée hoped to film inside of Orchard House itself, Chalamet as their neighbor Laurie, Laura Dern the ambient sounds of modern-day life such as cars and airplanes (and the delicate nature as Marmee, and Meryl Streep as Aunt March will let us fall in love, once again, with these of the many antique and original pieces remarkable women. inside the house) made that impossible. Nonplussed, the crew recreated Orchard The Louisa May Alcott Orchard House is open House in its entirety on private land in in Winter, weekdays 11-3 PM and Saturdays Concord, with remarkable likeness! 10-4:30 PM, Sundays 1-4:30 PM.

The Concord Players Celebrate 100 Years… Louisa May Alcott’s Legacy Lives On The Concord Players trace their roots to Louisa May Alcott who, along with her sisters, founded the Concord Dramatic Union in 1857. The Alcotts performed their plays, many of them original, in the parlor of their home at Orchard House and in the homes of friends in the town. In 1872 the Concord Dramatic Union became The Concord Dramatic Club, and in 1919, The Concord Players. It is then, in the early years of the 20th century, that the organization as it is now began to take shape. Playwright, author, and editor Samuel Merwin moved to Concord from New York, inspiring renewed vigor in the company. He capitalized on his literary and publishing contacts from New York, bringing star power to leading roles, and invested his formidable 46

talents into breaking new ground in community theater. Plays to dramatize, edify, and amuse have been staged with earnest deliberation and thoughtful planning. Actors and directors study the playwright’s intent and, through the unique and wondrous collaboration that is theatre craft, invite the audience to share in the accomplishment. Today the Players produce three shows annually: typically a comedy, a dramatic play, and a musical.

BY LINDA McCONCHIE, THE CONCORD PLAYERS

The Concord Players are located at The Performing Arts Center, 51 Walden Street in Concord Center. For more information about their 100th anniversary season please visit: www.concordplayers.org