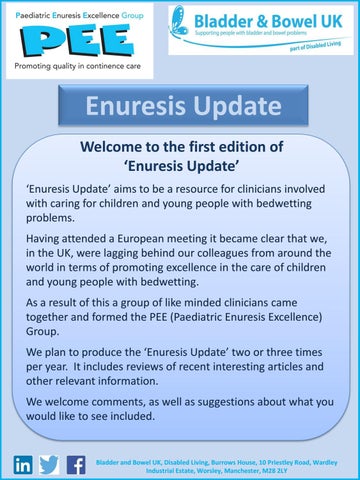 As a result of this a group of like minded clinicians came together and formed the PEE (Paediatric Enuresis Excellence) Group. We plan to produce the ‘Enuresis Update’ two or three times per year. It includes reviews of recent interesting articles and other relevant information. We welcome comments, as well as suggestions about what you would like to see included.

World Bedwetting Day 2018 Bedwetting is recognised as a medical condition from age five years. Studies have identified that if left untreated bedwetting can have a serious detrimental effect on a child’s self-esteem, emotional wellbeing and daytime functioning, including on socialisation and school performance. The impact on the child and their family is often underestimated and trivialised. The International Children’s Continence Society (ICCS) and the European Society for Paediatric Urology (ESPU) launched the first World Bedwetting Day (WBD) in 2015. This year will be the fourth consecutive year that the day will be marked globally and it will take place on 29th May 2018. The initiative will continue to raise awareness among the public and healthcare professionals about this common medical condition. Within the UK, this year’s WBD will focus on empowering parents and is supported by information and resources on the following websites: www.stopbedwetting.org Bladder and Bowel UK and ERIC have a range of free downloadable resources to help support affected parents and children at: http://www.bladderandboweluk.co.uk/children-youngpeople/children-resources/ and at www.eric.org.uk To encourage children to remember the lifestyle advice that helps with bedwetting, we have also developed a snakes and ladders board game. This is freely available to download from the Bladder and Bowel UK website: http://www.bladderandboweluk.co.uk/world-bedwetting-day-2018/

Bladder and Bowel UK Enuresis Award 2018 Bladder and Bowel UK is delighted to announce the first ever Enuresis Award to recognise excellence in enuresis care. Have you, or your team, been innovative and /or made a difference to the care of children and young people with bedwetting? If so we would encourage you to apply. The award will consider how applicants promoted World Bedwetting Day (WBD), how they raise awareness of bedwetting generally, or how they improve parental/carer involvement and improve outcomes for children and families. There is a prize of ÂŁ500 For more information contact: bladderandboweluk@disabledliving.co.uk

Research Reviews Desmopressin (melt) therapy in children with monosymptomatic nocturnal enuresis and nocturnal polyuria results in improved neuropsychological functioning and sleep Charlotte Van Herzeele, Karlien Dhondt, Sanne Poels, Ann Raes, Piet Hoebeke, Luitzen-Albert Groen, Johan Vande Walle Paediatric Nephrology (2016) 31: 1477 â&#x20AC;&#x201C; 1484 Abstract The study investigated whether a decrease in the volume of urine produced at night using desmopressin would improve quality of sleep and neuropsychological functioning (two major comorbidities of enuresis). The study was open label and prospective, in thirty children (mean age 10.4 years) with monosymptomatic enuresis, who were able to take desmopressin oral lyophilisate (DesmoMelt). Eight of the children had ADHD. The children had video-polysomnographic and neuropsychological testing prior to starting desmopressin and again after six months of therapy. Parents and teachers completed questionnaires. With regards to sleep quality, the PLMS index (periodic limb movements index) improved significantly over the six months as did the secondary end point of first undisturbed sleep period. Parents and children reported improved QoL and parents reported less internalising and externalising problems (not noted by teachers). There was also a significant improvement in auditory working memory but not attention or other aspects of executive function. Of the thirty children included, ten showed complete response to desmopressin, thirteen a partial response and five had no response. This study provides initial evidence that monosymptomatic nocturnal enuresis is associated with abnormal sleep indices and neuropsychological functioning, that can be improved by reducing nocturnal urinary volumes with desmopressin. It may be that this effect could occur even if dryness is not achieved, as prolongation of the first undisturbed sleep period may be important. Further larger studies are required to confirm this.

Implications for practice Nocturnal polyuria results in filling of the bladder, which in turn results in cortical arousal from full bladder signals. This cortical arousal is insufficient to wake some children who wet the bed, but does disrupt their sleep. This study suggests that poor sleep then aggravates any underlying neuropsychological problems, such as ADHD.

Effects of food and pharmaceutical formulation on desmopressin pharmacokinetics in children Robin Michelet, Lien Dossche, Pauline De Bruyne, Pieter Colin, Koen Boussery, Johan Vande Walle, Jan Van Bocxlaer, An Vermeulen Clinical Pharmacokinet (2016) 55: 1159 â&#x20AC;&#x201C; 1170 Abstract Studies in adults have identified that desmopressin 200mcg tablet and 120 mcg lyophilisate (melt) are bio-equivalent in adults and that the melt has a superior effect on diuresis in children. The latter was thought to be the result of desmopressinâ&#x20AC;&#x2122;s direct absorption by the buccal mucosa, thereby bypassing the impact of food in the stomach, which slows absorption. It is advised that desmopressin tablets should be taken on an empty stomach, which can be a challenge for young children due to the short time interval between their evening meal and bedtime. However, the effect of food on desmopressin pharmacokinetics and pharmacodynamics has not been specifically investigated in children, although it has in adults. This study was set up to investigate these effects in children. Method Previously published data from two studies were analysed using population pharmacokinetic modelling. This was applied to desmopressin pharmacokinetics data and used to extract more information from existing paediatric drug data, to generate new information and improve the collection of future information. Simulations were performed to further explore the relative bioavailability of both formulations of desmopressin and the effect of food.

Results The formulation and the fed state were included as covariates on the relative bioavailability. The melt was 32.1% more available than the tablet and children who had not eaten exhibited an increase in bioavailability of 101%, when compared with children who had eaten. The effect of food intake was found to be clinically significant. Recommendations were that for solid conclusions to be made regarding efficacy of desmopressin in children, future studies of children were needed and should include gathering of pharmacokinetic and pharmacodynamic data simultaneously.

Implications for practice The melt formulation has increased bioavailability compared with the tablet formulation. This is of particular relevance to younger children who tend to have a shorter time interval between their last meal and bed time, when desmopressin melt is preferable. If possible children taking tablet desmopressin medication should do so on an empty stomach.

Children with nocturnal enuresis and attention hyperactive disorder: A separate entity? Larisa Kovacevic, Courtney Wolfe-Christensen, Aliza Rizwan, Hong Lu, Yegappan Lakshmanan Journal of Pediatric Urology (2017) http://dx.doi.org/10.1016/j.jpurol.2017.07.002 Abstract The aim of this retrospective, observational study was three-fold: to identify if children with ADHD experienced greater severity of enuresis compared to children without ADHD; to see whether treatment success differed between patients with and without ADHD; to find out if treatment medication for ADHD affected the severity of enuresis symptoms and treatment response. Overall the study would identify if patients with ADHD require different enuresis management compared to those without. The study was retrospective and observational. Enuresis treatment started with behavioural modification; this included fluid modification, regular voiding including before bed and bowel treatment. The alarm was recommended if these failed, but was not always taken up. Medication was prescribed if behavioural modification failed and was tailored to include desmopressin, desmopressin/tolterodine combination, or imipramine +/-desmopressin. The strengths were the inclusion of children who had ADHD and were not on medication for ADHD as well as those who were taking medication for ADHD, the selection of an age and gender-matched control group and assessment for constipation. Limitations were the small numbers of children (95 with ADHD and 95 without â&#x20AC;&#x201C; the ADHD-control group). Partial and full responders were grouped together. As the study was done at a tertiary referral centre the children may have had more severe enuresis and treatment resistance.

Resources Enuresis Information leaflets are available from: Bladder and Bowel UK at: www.bladderandboweluk.co.uk/children-young-people/children-resources/ and ERIC at:

Sharing Best Practice In future editions we will have a section in the Enuresis Update for you to share comments, concerns and local approaches to best practice. We will publish your letters, comments, questions, ideas and descriptions of things you have done that have improved care for children and families in your area, or anything you feel might help others. Let us know what you think of this newsletter and if there is anything you would particularly like to see in future editions. Email us at bladderandboweluk@disabledliving.co.uk 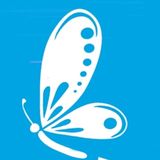 Enuresis Update aims to be a resource for clinicians involved with caring for children and young people with bedwetting problems.

Enuresis Update aims to be a resource for clinicians involved with caring for children and young people with bedwetting problems.