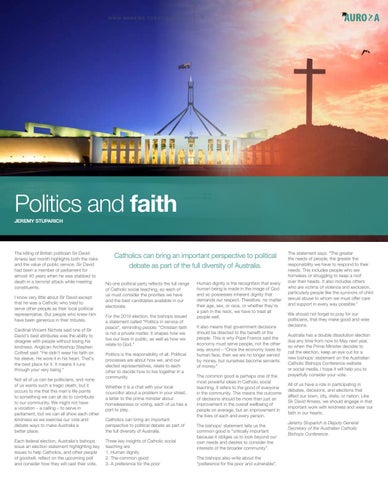 The killing of British politician Sir David Amess last month highlights both the risks and the value of public service. Sir David had been a member of parliament for almost 40 years when he was stabbed to death in a terrorist attack while meeting constituents. I know very little about Sir David except that he was a Catholic who tried to serve other people as their local political representative. But people who knew him have been generous in their tributes. Cardinal Vincent Nichols said one of Sir David&#39;s best attributes was the ability to disagree with people without losing his kindness. Anglican Archbishop Stephen Cottrell said: “He didn&#39;t wear his faith on his sleeve. He wore it in his heart. That&#39;s the best place for it. It means it runs through your very being.” Not all of us can be politicians, and none of us wants such a tragic death, but it occurs to me that this man&#39;s life points to something we can all do to contribute to our community. We might not have a vocation – a calling – to serve in parliament, but we can all show each other kindness as we exercise our vote and debate ways to make Australia a better place. Each federal election, Australia&#39;s bishops issue an election statement highlighting key issues to help Catholics, and other people of goodwill, reflect on the upcoming poll and consider how they will cast their vote.

Human dignity is the recognition that every human being is made in the image of God and so possesses inherent dignity that demands our respect. Therefore, no matter their age, sex, or race, or whether they&#39;re a pain in the neck, we have to treat all people well. It also means that government decisions should be directed to the benefit of the people. This is why Pope Francis said the economy must serve people, not the other way around – &quot;Once the economy loses its human face, then we are no longer served by money, but ourselves become servants of money.&quot; The common good is perhaps one of the most powerful ideas in Catholic social teaching. It refers to the good of everyone in the community. This means the outcome of decisions should be more than just an improvement in the overall wellbeing of people on average, but an improvement in the lives of each and every person. The bishops&#39; statement tells us the common good is &quot;critically important because it obliges us to look beyond our own needs and desires to consider the interests of the broader community&quot;. The bishops also write about the &quot;preference for the poor and vulnerable&quot;.

The statement says: &quot;The greater the needs of people, the greater the responsibility we have to respond to their needs. This includes people who are homeless or struggling to keep a roof over their heads. It also includes others who are victims of violence and exclusion, particularly people like the survivors of child sexual abuse to whom we must offer care and support in every way possible.&quot; We should not forget to pray for our politicians, that they make good and wise decisions. Australia has a double dissolution election due any time from now to May next year, so when the Prime Minister decides to call the election, keep an eye out for a new bishops&#39; statement on the Australian Catholic Bishops Conference website or social media. I hope it will help you to prayerfully consider your vote. All of us have a role in participating in debates, decisions, and elections that affect our town, city, state, or nation. Like Sir David Amess, we should engage in that important work with kindness and wear our faith in our hearts. Jeremy Stuparich is Deputy General Secretary of the Australian Catholic Bishops Conference. 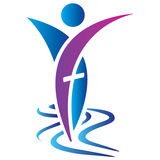