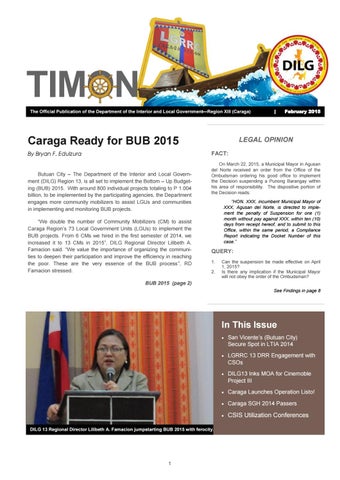 Butuan City – The Department of the Interior and Local Government (DILG) Region 13, is all set to implement the Bottom – Up Budgeting (BUB) 2015. With around 800 individual projects totaling to P 1.004 billion, to be implemented by the participating agencies, the Department engages more community mobilizers to assist LGUs and communities in implementing and monitoring BUB projects. “We double the number of Community Mobilizers (CM) to assist Caraga Region’s 73 Local Government Units (LGUs) to implement the BUB projects. From 6 CMs we hired in the first semester of 2014, we increased it to 13 CMs in 2015”, DILG Regional Director Lilibeth A. Famacion said. “We value the importance of organizing the communities to deepen their participation and improve the efficiency in reaching the poor. These are the very essence of the BUB process”, RD Famacion stressed.

Can the suspension be made effective on April 1, 2015? Is there any implication if the Municipal Mayor will not obey the order of the Ombudsman? 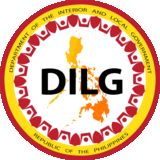