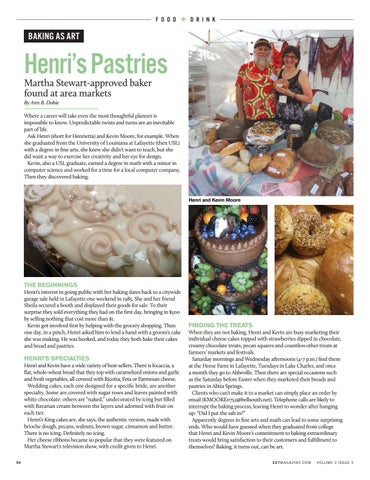 Henri’s Pastries Martha Stewart-approved baker found at area markets By Ann B. Dobie Where a career will take even the most thoughtful planner is impossible to know. Unpredictable twists and turns are an inevitable part of life. Ask Henri (short for Henrietta) and Kevin Moore, for example. When she graduated from the University of Louisiana at Lafayette (then USL) with a degree in ﬁne arts, she knew she didn’t want to teach, but she did want a way to exercise her creativity and her eye for design. Kevin, also a USL graduate, earned a degree in math with a minor in computer science and worked for a time for a local computer company. Then they discovered baking.

THE BEGINNINGS Henri’s interest in going public with her baking dates back to a citywide garage sale held in Lafayette one weekend in 1985. She and her friend Sheila secured a booth and displayed their goods for sale. To their surprise they sold everything they had on the ﬁrst day, bringing in $500 by selling nothing that cost more than $1. Kevin got involved ﬁrst by helping with the grocery shopping. Then one day, in a pinch, Henri asked him to lend a hand with a groom’s cake she was making. He was hooked, and today they both bake their cakes and bread and pastries.

HENRI’S SPECIALTIES Henri and Kevin have a wide variety of best-sellers. There is focaccia, a ﬂat, whole-wheat bread that they top with caramelized onions and garlic and fresh vegetables, all covered with Ricotta, Feta or Parmesan cheese. Wedding cakes, each one designed for a speciﬁc bride, are another specialty. Some are covered with sugar roses and leaves painted with white chocolate; others are “naked,” undecorated by icing but ﬁlled with Bavarian cream between the layers and adorned with fruit on each tier. Henri’s King cakes are, she says, the authentic version, made with brioche dough, pecans, walnuts, brown sugar, cinnamon and butter. There is no icing. Deﬁnitely no icing. Her cheese ribbons became so popular that they were featured on Martha Stewart’s television show, with credit given to Henri. 54

FINDING THE TREATS When they are not baking, Henri and Kevin are busy marketing their individual cheese cakes topped with strawberries dipped in chocolate, creamy chocolate treats, pecan squares and countless other treats at farmers’ markets and festivals. Saturday mornings and Wednesday afternoons (4-7 p.m.) ﬁnd them at the Horse Farm in Lafayette, Tuesdays in Lake Charles, and once a month they go to Abbeville. Then there are special occasions such as the Saturday before Easter when they marketed their breads and pastries in Abita Springs. Clients who can’t make it to a market can simply place an order by email (KMOORE0752@bellsouth.net). Telephone calls are likely to interrupt the baking process, leaving Henri to wonder after hanging up: “Did I put the salt in?” Apparently degrees in ﬁne arts and math can lead to some surprising ends. Who would have guessed when they graduated from college that Henri and Kevin Moore’s commitment to baking extraordinary treats would bring satisfaction to their customers and fulﬁllment to themselves? Baking, it turns out, can be art. 3 3 7M A GA ZIN E.C OM