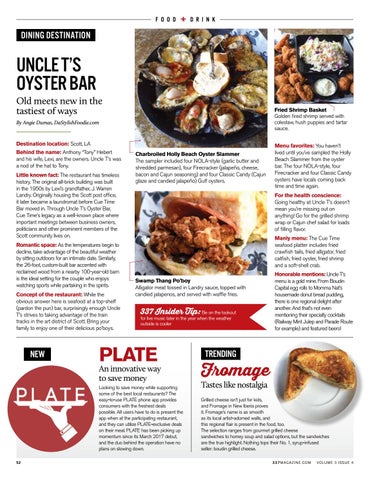 Old meets new in the tastiest of ways

Destination location: Scott, LA Behind the name: Anthony “Tony” Hebert and his wife, Lexi, are the owners. Uncle T’s was a nod of the hat to Tony. Little known fact: The restaurant has timeless history. The original all-brick building was built in the 1950s by Lexi’s grandfather, J. Warren Landry. Originally housing the Scott post office, it later became a laundromat before Cue Time Bar moved in. Through Uncle T’s Oyster Bar, Cue Time’s legacy as a well-known place where important meetings between business owners, politicians and other prominent members of the Scott community lives on. Romantic space: As the temperatures begin to decline, take advantage of the beautiful weather by sitting outdoors for an intimate date. Similarly, the 26-foot, custom-built bar accented with reclaimed wood from a nearby 100-year-old barn is the ideal setting for the couple who enjoys watching sports while partaking in the spirits. Concept of the restaurant: While the obvious answer here is seafood at a top-shelf (pardon the pun) bar, surprisingly enough Uncle T’s strives to taking advantage of the train tracks in the art district of Scott. Bring your family to enjoy one of their delicious po’boys.

337 Insider Tip: Be on the lookout for live music later in the year when the weather outside is cooler

Honorable mentions: Uncle T’s menu is a gold mine. From Boudin Capital egg rolls to Momma Nat’s housemade donut bread pudding, there is one regional delight after another. And that’s not even mentioning their specialty cocktails (Railway Mint Julep and Parade Route for example) and featured beers!

An innovative way to save money

Looking to save money while supporting some of the best local restaurants? The easy-to-use PLATE phone app provides consumers with the freshest deals possible. All users have to do is present the app when at the participating restaurant, and they can utilize PLATE-exclusive deals on their meal. PLATE has been picking up momentum since its March 2017 debut, and the duo behind the operation have no plans on slowing down.

Grilled cheese isn’t just for kids, and Fromage in New Iberia proves it. Fromage’s name is as smooth as its local artist-adorned walls, and this regional flair is present in the food, too. The selection ranges from gourmet grilled cheese sandwiches to homey soup and salad options, but the sandwiches are the true highlight. Nothing tops their No. 1, syrup-infused seller: boudin grilled cheese.