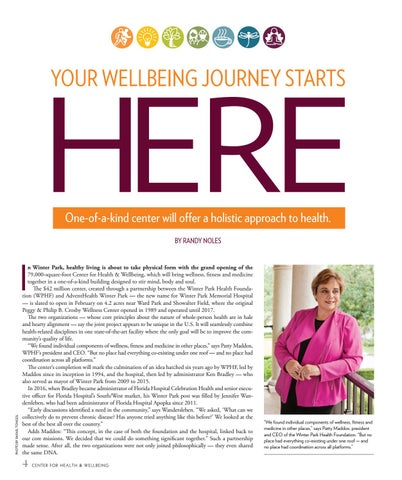 One-of-a-kind center will offer a holistic approach to health.

n Winter Park, healthy living is about to take physical form with the grand opening of the 79,000-square-foot Center for Health &amp; Wellbeing, which will bring wellness, fitness and medicine together in a one-of-a-kind building designed to stir mind, body and soul. The $42 million center, created through a partnership between the Winter Park Health Foundation (WPHF) and AdventHealth Winter Park — the new name for Winter Park Memorial Hospital — is slated to open in February on 4.2 acres near Ward Park and Showalter Field, where the original Peggy &amp; Philip B. Crosby Wellness Center opened in 1989 and operated until 2017. The two organizations — whose core principles about the nature of whole-person health are in hale and hearty alignment — say the joint project appears to be unique in the U.S. It will seamlessly combine health-related disciplines in one state-of-the-art facility where the only goal will be to improve the community’s quality of life. “We found individual components of wellness, fitness and medicine in other places,” says Patty Maddox, WPHF’s president and CEO. “But no place had everything co-existing under one roof — and no place had coordination across all platforms.” The center’s completion will mark the culmination of an idea hatched six years ago by WPHF, led by Maddox since its inception in 1994, and the hospital, then led by administrator Ken Bradley — who also served as mayor of Winter Park from 2009 to 2015. In 2016, when Bradley became administrator of Florida Hospital Celebration Health and senior executive officer for Florida Hospital’s South/West market, his Winter Park post was filled by Jennifer Wandersleben, who had been administrator of Florida Hospital Apopka since 2011. “Early discussions identified a need in the community,” says Wandersleben. “We asked, ‘What can we collectively do to prevent chronic disease? Has anyone tried anything like this before?’ We looked at the best of the best all over the country.” Adds Maddox: “This concept, in the case of both the foundation and the hospital, linked back to our core missions. We decided that we could do something significant together.” Such a partnership made sense. After all, the two organizations were not only joined philosophically — they even shared the same DNA.

“We found individual components of wellness, fitness and medicine in other places,” says Patty Maddox, president and CEO of the Winter Park Health Foundation. “But no place had everything co-existing under one roof — and no place had coordination across all platforms.”