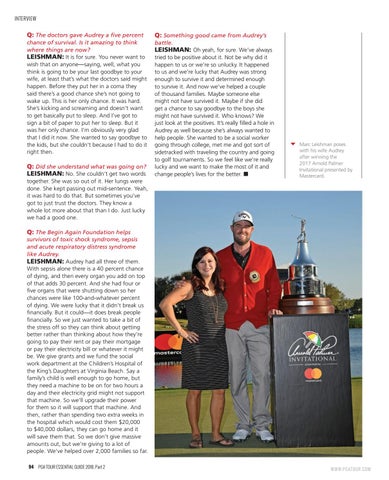 Q: The doctors gave Audrey a five percent chance of survival. Is it amazing to think where things are now? LEISHMAN: It is for sure. You never want to wish that on anyone—saying, well, what you think is going to be your last goodbye to your wife, at least that’s what the doctors said might happen. Before they put her in a coma they said there’s a good chance she’s not going to wake up. This is her only chance. It was hard. She’s kicking and screaming and doesn’t want to get basically put to sleep. And I’ve got to sign a bit of paper to put her to sleep. But it was her only chance. I’m obviously very glad that I did it now. She wanted to say goodbye to the kids, but she couldn’t because I had to do it right then. Q: Did she understand what was going on? LEISHMAN: No. She couldn’t get two words together. She was so out of it. Her lungs were done. She kept passing out mid-sentence. Yeah, it was hard to do that. But sometimes you’ve got to just trust the doctors. They know a whole lot more about that than I do. Just lucky we had a good one.

Q: Something good came from Audrey’s battle. LEISHMAN: Oh yeah, for sure. We’ve always tried to be positive about it. Not be why did it happen to us or we’re so unlucky. It happened to us and we’re lucky that Audrey was strong enough to survive it and determined enough to survive it. And now we’ve helped a couple of thousand families. Maybe someone else might not have survived it. Maybe if she did get a chance to say goodbye to the boys she might not have survived it. Who knows? We just look at the positives. It’s really filled a hole in Audrey as well because she’s always wanted to help people. She wanted to be a social worker going through college, met me and got sort of sidetracked with traveling the country and going to golf tournaments. So we feel like we’re really lucky and we want to make the most of it and change people’s lives for the better. 

Marc Leishman poses with his wife Audrey after winning the 2017 Arnold Palmer Invitational presented by Mastercard.

Q: The Begin Again Foundation helps survivors of toxic shock syndrome, sepsis and acute respiratory distress syndrome like Audrey. LEISHMAN: Audrey had all three of them. With sepsis alone there is a 40 percent chance of dying, and then every organ you add on top of that adds 30 percent. And she had four or five organs that were shutting down so her chances were like 100-and-whatever percent of dying. We were lucky that it didn’t break us financially. But it could—it does break people financially. So we just wanted to take a bit of the stress off so they can think about getting better rather than thinking about how they’re going to pay their rent or pay their mortgage or pay their electricity bill or whatever it might be. We give grants and we fund the social work department at the Children’s Hospital of the King’s Daughters at Virginia Beach. Say a family’s child is well enough to go home, but they need a machine to be on for two hours a day and their electricity grid might not support that machine. So we’ll upgrade their power for them so it will support that machine. And then, rather than spending two extra weeks in the hospital which would cost them $20,000 to $40,000 dollars, they can go home and it will save them that. So we don’t give massive amounts out, but we’re giving to a lot of people. We’ve helped over 2,000 families so far. 94

This issue of the PGA TOUR Essential Guide to Golf covers the second half of the 2018 PGA TOUR and Champions Tour seasons. Defending FedExCup champion Justin Thomas found himself in a familiar spot midway through the 2017-18 PGA TOUR season—atop the FedExCup standings—with Jason Day, Phil Mickelson and other stars in close pursuit