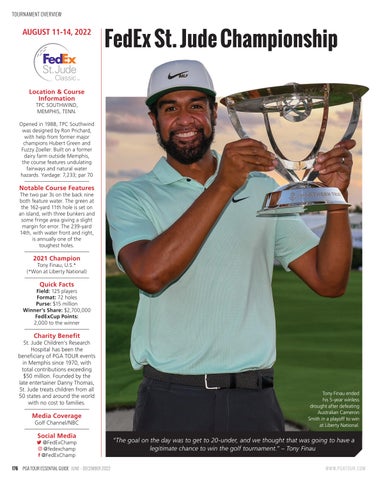 The two par 3s on the back nine both feature water. The green at the 162-yard 11th hole is set on an island, with three bunkers and some fringe area giving a slight margin for error. The 239-yard 14th, with water front and right, is annually one of the toughest holes.

St. Jude Children’s Research Hospital has been the beneficiary of PGA TOUR events in Memphis since 1970, with total contributions exceeding $50 million. Founded by the late entertainer Danny Thomas, St. Jude treats children from all 50 states and around the world with no cost to families.

Tony Finau ended his 5-year winless drought after defeating Australian Cameron Smith in a playoff to win at Liberty National.

“The goal on the day was to get to 20-under, and we thought that was going to have a legitimate chance to win the golf tournament.” – Tony Finau W W W.P GAT OUR.COM