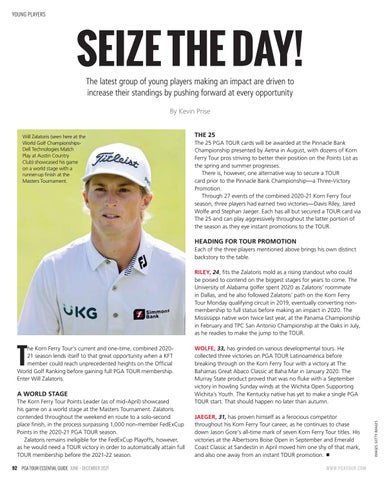 SEIZE THE DAY! The latest group of young players making an impact are driven to increase their standings by pushing forward at every opportunity By Kevin Prise

Will Zalatoris (seen here at the World Golf ChampionshipsDell Technologies Match Play at Austin Country Club) showcased his game on a world stage with a runner-up finish at the Masters Tournament.

The 25 The 25 PGA TOUR cards will be awarded at the Pinnacle Bank Championship presented by Aetna in August, with dozens of Korn Ferry Tour pros striving to better their position on the Points List as the spring and summer progresses. There is, however, one alternative way to secure a TOUR card prior to the Pinnacle Bank Championship—a Three-Victory Promotion. Through 27 events of the combined 2020-21 Korn Ferry Tour season, three players had earned two victories—Davis Riley, Jared Wolfe and Stephan Jaeger. Each has all but secured a TOUR card via The 25 and can play aggressively throughout the latter portion of the season as they eye instant promotions to the TOUR.

Heading for TOUR promotion Each of the three players mentioned above brings his own distinct backstory to the table. Riley, 24, fits the Zalatoris mold as a rising standout who could be poised to contend on the biggest stages for years to come. The University of Alabama golfer spent 2020 as Zalatoris’ roommate in Dallas, and he also followed Zalatoris’ path on the Korn Ferry Tour Monday qualifying circuit in 2019, eventually converting nonmembership to full status before making an impact in 2020. The Mississippi native won twice last year, at the Panama Championship in February and TPC San Antonio Championship at the Oaks in July, as he readies to make the jump to the TOUR.

A world stage The Korn Ferry Tour Points Leader (as of mid-April) showcased his game on a world stage at the Masters Tournament. Zalatoris contended throughout the weekend en route to a solo-second place finish, in the process surpassing 1,000 non-member FedExCup Points in the 2020-21 PGA TOUR season. Zalatoris remains ineligible for the FedExCup Playoffs, however, as he would need a TOUR victory in order to automatically attain full TOUR membership before the 2021-22 season. 92  PGA TOUR ESSENTIAL GUIDE  June – December 2021

Wolfe, 33, has grinded on various developmental tours. He collected three victories on PGA TOUR Latinoamérica before breaking through on the Korn Ferry Tour with a victory at The Bahamas Great Abaco Classic at Baha Mar in January 2020. The Murray State product proved that was no fluke with a September victory in howling Sunday winds at the Wichita Open Supporting Wichita’s Youth. The Kentucky native has yet to make a single PGA TOUR start. That should happen no later than autumn. Jaeger, 31, has proven himself as a ferocious competitor throughout his Korn Ferry Tour career, as he continues to chase down Jason Gore’s all-time mark of seven Korn Ferry Tour titles. His victories at the Albertsons Boise Open in September and Emerald Coast Classic at Sandestin in April moved him one shy of that mark, and also one away from an instant TOUR promotion. 

he Korn Ferry Tour’s current and one-time, combined 202021 season lends itself to that great opportunity when a KFT member could reach unprecedented heights on the Official World Golf Ranking before gaining full PGA TOUR membership. Enter Will Zalatoris.