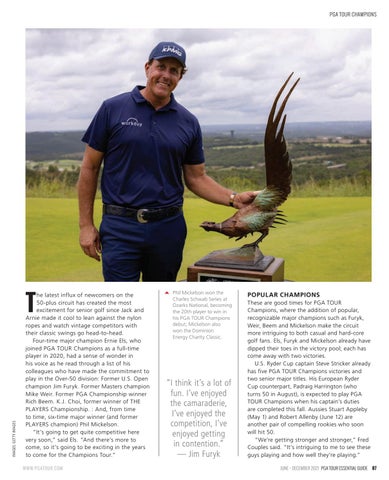 he latest influx of newcomers on the 50-plus circuit has created the most excitement for senior golf since Jack and Arnie made it cool to lean against the nylon ropes and watch vintage competitors with their classic swings go head-to-head. Four-time major champion Ernie Els, who joined PGA TOUR Champions as a full-time player in 2020, had a sense of wonder in his voice as he read through a list of his colleagues who have made the commitment to play in the Over-50 division: Former U.S. Open champion Jim Furyk. Former Masters champion Mike Weir. Former PGA Championship winner Rich Beem. K.J. Choi, former winner of THE PLAYERS Championship. : And, from time to time, six-time major winner (and former PLAYERS champion) Phil Mickelson. “It’s going to get quite competitive here very soon,” said Els. “And there’s more to come, so it’s going to be exciting in the years to come for the Champions Tour.”

Popular champions These are good times for PGA TOUR Champions, where the addition of popular, recognizable major champions such as Furyk, Weir, Beem and Mickelson make the circuit more intriguing to both casual and hard-core golf fans. Els, Furyk and Mickelson already have dipped their toes in the victory pool; each has come away with two victories. U.S. Ryder Cup captain Steve Stricker already has five PGA TOUR Champions victories and two senior major titles. His European Ryder Cup counterpart, Padraig Harrington (who turns 50 in August), is expected to play PGA TOUR Champions when his captain’s duties are completed this fall. Aussies Stuart Appleby (May 1) and Robert Allenby (June 12) are another pair of compelling rookies who soon will hit 50. “We’re getting stronger and stronger,” Fred Couples said. “It’s intriguing to me to see these guys playing and how well they’re playing.” June – December 2021  PGA TOUR ESSENTIAL GUIDE  87