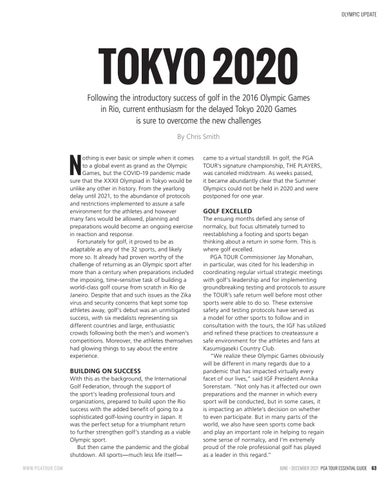 Following the introductory success of golf in the 2016 Olympic Games in Rio, current enthusiasm for the delayed Tokyo 2020 Games is sure to overcome the new challenges By Chris Smith

othing is ever basic or simple when it comes to a global event as grand as the Olympic Games, but the COVID-19 pandemic made sure that the XXXII Olympiad in Tokyo would be unlike any other in history. From the yearlong delay until 2021, to the abundance of protocols and restrictions implemented to assure a safe environment for the athletes and however many fans would be allowed, planning and preparations would become an ongoing exercise in reaction and response. Fortunately for golf, it proved to be as adaptable as any of the 32 sports, and likely more so. It already had proven worthy of the challenge of returning as an Olympic sport after more than a century when preparations included the imposing, time-sensitive task of building a world-class golf course from scratch in Rio de Janeiro. Despite that and such issues as the Zika virus and security concerns that kept some top athletes away, golf’s debut was an unmitigated success, with six medalists representing six different countries and large, enthusiastic crowds following both the men’s and women’s competitions. Moreover, the athletes themselves had glowing things to say about the entire experience.

Building on success With this as the background, the International Golf Federation, through the support of the sport’s leading professional tours and organizations, prepared to build upon the Rio success with the added benefit of going to a sophisticated golf-loving country in Japan. It was the perfect setup for a triumphant return to further strengthen golf’s standing as a viable Olympic sport. But then came the pandemic and the global shutdown. All sports—much less life itself— w w w.p gat our.com

came to a virtual standstill. In golf, the PGA TOUR’s signature championship, THE PLAYERS, was canceled midstream. As weeks passed, it became abundantly clear that the Summer Olympics could not be held in 2020 and were postponed for one year.

Golf excelled The ensuing months defied any sense of normalcy, but focus ultimately turned to reestablishing a footing and sports began thinking about a return in some form. This is where golf excelled. PGA TOUR Commissioner Jay Monahan, in particular, was cited for his leadership in coordinating regular virtual strategic meetings with golf’s leadership and for implementing groundbreaking testing and protocols to assure the TOUR’s safe return well before most other sports were able to do so. These extensive safety and testing protocols have served as a model for other sports to follow and in consultation with the tours, the IGF has utilized and refined these practices to createassure a safe environment for the athletes and fans at Kasumigaseki Country Club. “We realize these Olympic Games obviously will be different in many regards due to a pandemic that has impacted virtually every facet of our lives,” said IGF President Annika Sorenstam. “Not only has it affected our own preparations and the manner in which every sport will be conducted, but in some cases, it is impacting an athlete’s decision on whether to even participate. But in many parts of the world, we also have seen sports come back and play an important role in helping to regain some sense of normalcy, and I’m extremely proud of the role professional golf has played as a leader in this regard.” June – December 2021  PGA TOUR ESSENTIAL GUIDE  63