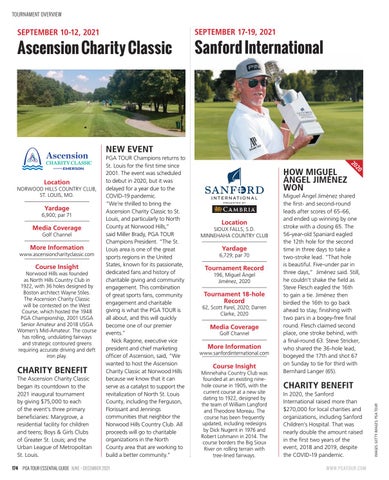 CHARITY BENEFIT The Ascension Charity Classic began its countdown to the 2021 inaugural tournament by giving $75,000 to each of the event’s three primary beneficiaries: Marygrove, a residential facility for children and teens; Boys & Girls Clubs of Greater St. Louis; and the Urban League of Metropolitan St. Louis. 174

Minnehaha Country Club was founded at an existing ninehole course in 1905, with the current course at a new site dating to 1922, designed by the team of William Langford and Theodore Moreau. The course has been frequently updated, including redesigns by Dick Nugent in 1976 and Robert Lohmann in 2014. The course borders the Big Sioux River on rolling terrain with tree-lined fairways.

Miguel Ángel Jiménez shared the first- and second-round leads after scores of 65-66, and ended up winning by one stroke with a closing 65. The 56-year-old Spaniard eagled the 12th hole for the second time in three days to take a two-stroke lead. “That hole is beautiful. Five-under par in three days,” Jiménez said. Still, he couldn’t shake the field as Steve Flesch eagled the 16th to gain a tie. Jiménez then birdied the 16th to go back ahead to stay, finishing with two pars in a bogey-free final round. Flesch claimed second place, one stroke behind, with a final-round 63. Steve Stricker, who shared the 36-hole lead, bogeyed the 17th and shot 67 on Sunday to tie for third with Bernhard Langer (65).

CHARITY BENEFIT In 2020, the Sanford International raised more than $270,000 for local charities and organizations, including Sanford Children’s Hospital. That was nearly double the amount raised in the first two years of the event, 2018 and 2019, despite the COVID-19 pandemic.

PGA TOUR Champions returns to St. Louis for the first time since 2001. The event was scheduled to debut in 2020, but it was delayed for a year due to the COVID-19 pandemic. “We’re thrilled to bring the Ascension Charity Classic to St. Louis, and particularly to North County at Norwood Hills,” said Miller Brady, PGA TOUR Champions President. “The St. Louis area is one of the great sports regions in the United States, known for its passionate, dedicated fans and history of charitable giving and community engagement. This combination of great sports fans, community engagement and charitable giving is what the PGA TOUR is all about, and this will quickly become one of our premier events.” Nick Ragone, executive vice president and chief marketing officer of Ascension, said, “We wanted to host the Ascension Charity Classic at Norwood Hills because we know that it can serve as a catalyst to support the revitalization of North St. Louis County, including the Ferguson, Florissant and Jennings communities that neighbor the Norwood Hills Country Club. All proceeds will go to charitable organizations in the North County area that are working to build a better community.”