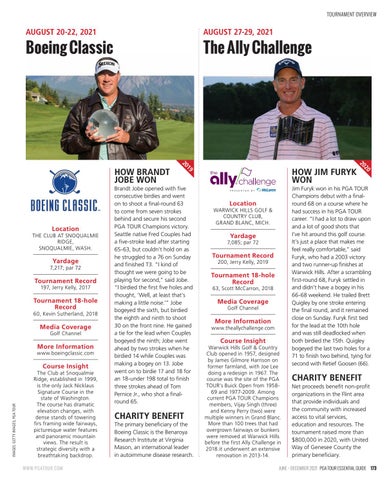 The Club at Snoqualmie Ridge, established in 1999, is the only Jack Nicklaus Signature Course in the state of Washington. The course has dramatic elevation changes, with dense stands of towering firs framing wide fairways, picturesque water features and panoramic mountain views. The result is strategic diversity with a breathtaking backdrop. W W W.P GAT OUR.COM

Brandt Jobe opened with five consecutive birdies and went on to shoot a final-round 63 to come from seven strokes behind and secure his second PGA TOUR Champions victory. Seattle native Fred Couples had a five-stroke lead after starting 65-63, but couldn’t hold on as he struggled to a 76 on Sunday and finished T3. “I kind of thought we were going to be playing for second,” said Jobe. “I birdied the first five holes and thought, ‘Well, at least that’s making a little noise.’” Jobe bogeyed the sixth, but birdied the eighth and ninth to shoot 30 on the front nine. He gained a tie for the lead when Couples bogeyed the ninth; Jobe went ahead by two strokes when he birdied 14 while Couples was making a bogey on 13. Jobe went on to birdie 17 and 18 for an 18-under 198 total to finish three strokes ahead of Tom Pernice Jr., who shot a finalround 65.

CHARITY BENEFIT The primary beneficiary of the Boeing Classic is the Benaroya Research Institute at Virginia Mason, an international leader in autoimmune disease research.

Warwick Hills Golf & Country Club opened in 1957, designed by James Gilmore Harrison on former farmland, with Joe Lee doing a redesign in 1967. The course was the site of the PGA TOUR’s Buick Open from 195869 and 1977-2009. Among current PGA TOUR Champions members, Vijay Singh (three) and Kenny Perry (two) were multiple winners in Grand Blanc. More than 100 trees that had overgrown fairways or bunkers were removed at Warwick Hills before the first Ally Challenge in 2018.it underwent an extensive renovation in 2013-14.

Jim Furyk won in his PGA TOUR Champions debut with a finalround 68 on a course where he had success in his PGA TOUR career. “I had a lot to draw upon and a lot of good shots that I’ve hit around this golf course. It’s just a place that makes me feel really comfortable,” said Furyk, who had a 2003 victory and two runner-up finishes at Warwick Hills. After a scrambling first-round 68, Furyk settled in and didn’t have a bogey in his 66-68 weekend. He trailed Brett Quigley by one stroke entering the final round, and it remained close on Sunday. Furyk first tied for the lead at the 10th hole and was still deadlocked when both birdied the 15th. Quigley bogeyed the last two holes for a 71 to finish two behind, tying for second with Retief Goosen (66).

CHARITY BENEFIT Net proceeds benefit non-profit organizations in the Flint area that provide individuals and the community with increased access to vital services, education and resources. The tournament raised more than $800,000 in 2020, with United Way of Genesee County the primary beneficiary.