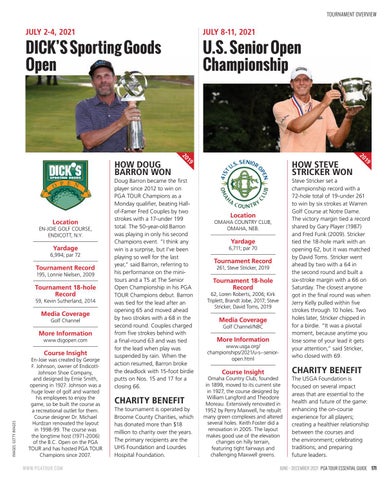 En-Joie was created by George F. Johnson, owner of EndicottJohnson Shoe Company, and designed by Ernie Smith, opening in 1927. Johnson was a huge lover of golf and wanted his employees to enjoy the game, so be built the course as a recreational outlet for them. Course designer Dr. Michael Hurdzan renovated the layout in 1998-99. The course was the longtime host (1971-2006) of the B.C. Open on the PGA TOUR and has hosted PGA TOUR Champions since 2007. W W W.P GAT OUR.COM

Doug Barron became the first player since 2012 to win on PGA TOUR Champions as a Monday qualifier, beating Hallof-Famer Fred Couples by two strokes with a 17-under 199 total. The 50-year-old Barron was playing in only his second Champions event. “I think any win is a surprise, but I’ve been playing so well for the last year,” said Barron, referring to his performance on the minitours and a T5 at The Senior Open Championship in his PGA TOUR Champions debut. Barron was tied for the lead after an opening 65 and moved ahead by two strokes with a 68 in the second round. Couples charged from five strokes behind with a final-round 63 and was tied for the lead when play was suspended by rain. When the action resumed, Barron broke the deadlock with 15-foot birdie putts on Nos. 15 and 17 for a closing 66.

CHARITY BENEFIT The tournament is operated by Broome County Charities, which has donated more than $18 million to charity over the years. The primary recipients are the UHS Foundation and Lourdes Hospital Foundation.

Steve Stricker set a championship record with a 72-hole total of 19-under 261 to win by six strokes at Warren Golf Course at Notre Dame. The victory margin tied a record shared by Gary Player (1987) and Fred Funk (2009). Stricker tied the 18-hole mark with an opening 62, but it was matched by David Toms. Stricker went ahead by two with a 64 in the second round and built a six-stroke margin with a 66 on Saturday. The closest anyone got in the final round was when Jerry Kelly pulled within five strokes through 10 holes. Two holes later, Stricker chipped in for a birdie. “It was a pivotal moment, because anytime you lose some of your lead it gets your attention,” said Stricker, who closed with 69.

Omaha Country Club, founded in 1899, moved to its current site in 1927, the course designed by William Langford and Theodore Moreau. Extensively renovated in 1952 by Perry Maxwell, he rebuilt many green complexes and altered several holes. Keith Foster did a renovation in 2005. The layout makes good use of the elevation changes on hilly terrain, featuring tight fairways and challenging Maxwell greens.

The USGA Foundation is focused on several impact areas that are essential to the health and future of the game: enhancing the on-course experience for all players; creating a healthier relationship between the courses and the environment; celebrating traditions; and preparing future leaders.