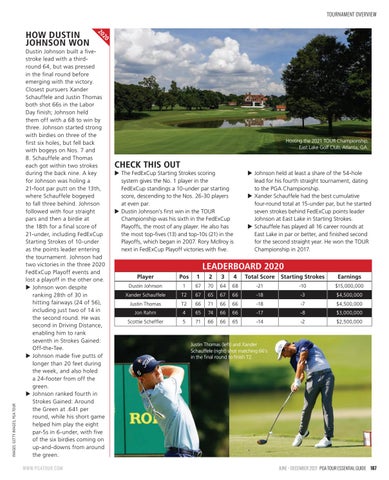 Dustin Johnson built a fivestroke lead with a thirdround 64, but was pressed in the final round before emerging with the victory. Closest pursuers Xander Schauffele and Justin Thomas both shot 66s in the Labor Day finish; Johnson held them off with a 68 to win by three. Johnson started strong with birdies on three of the first six holes, but fell back with bogeys on Nos. 7 and 8. Schauffele and Thomas each got within two strokes during the back nine. A key for Johnson was holing a 21-foot par putt on the 13th, where Schauffele bogeyed to fall three behind. Johnson followed with four straight pars and then a birdie at the 18th for a final score of 21-under, including FedExCup Starting Strokes of 10-under as the points leader entering the tournament. Johnson had two victories in the three 2020 FedExCup Playoff events and lost a playoff in the other one.  Johnson won despite ranking 28th of 30 in hitting fairways (24 of 56), including just two of 14 in the second round. He was second in Driving Distance, enabling him to rank seventh in Strokes Gained: Off-the-Tee.  Johnson made five putts of longer than 20 feet during the week, and also holed a 24-footer from off the green.  Johnson ranked fourth in Strokes Gained: Around the Green at .641 per round, while his short game helped him play the eight par-5s in 6-under, with five of the six birdies coming on up-and-downs from around the green. W W W.P GAT OUR.COM

CHECK THIS OUT  Johnson held at least a share of the 54-hole lead for his fourth straight tournament, dating to the PGA Championship.  Xander Schauffele had the best cumulative four-round total at 15-under par, but he started seven strokes behind FedExCup points leader Johnson at East Lake in Starting Strokes.  Schauffele has played all 16 career rounds at East Lake in par or better, and finished second for the second straight year. He won the TOUR Championship in 2017.

 The FedExCup Starting Strokes scoring system gives the No. 1 player in the FedExCup standings a 10-under par starting score, descending to the Nos. 26-30 players at even par.  Dustin Johnson’s first win in the TOUR Championship was his sixth in the FedExCup Playoffs, the most of any player. He also has the most top-fives (13) and top-10s (21) in the Playoffs, which began in 2007. Rory McIlroy is next in FedExCup Playoff victories with five.