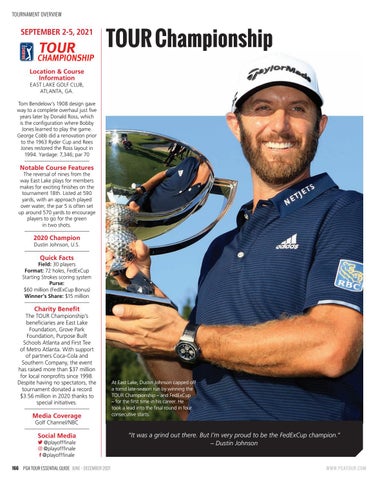 Tom Bendelow’s 1908 design gave way to a complete overhaul just five years later by Donald Ross, which is the configuration where Bobby Jones learned to play the game. George Cobb did a renovation prior to the 1963 Ryder Cup and Rees Jones restored the Ross layout in 1994. Yardage: 7,346; par 70

The reversal of nines from the way East Lake plays for members makes for exciting finishes on the tournament 18th. Listed at 590 yards, with an approach played over water, the par 5 is often set up around 570 yards to encourage players to go for the green in two shots.

The TOUR Championship’s beneficiaries are East Lake Foundation, Grove Park Foundation, Purpose Built Schools Atlanta and First Tee of Metro Atlanta. With support of partners Coca-Cola and Southern Company, the event has raised more than $37 million for local nonprofits since 1998. Despite having no spectators, the tournament donated a record $3.56 million in 2020 thanks to special initiatives.

At East Lake, Dustin Johnson capped off a torrid late-season run by winning the TOUR Championship – and FedExCup – for the first time in his career. He took a lead into the final round in four consecutive starts.

“It was a grind out there. But I’m very proud to be the FedExCup champion.” – Dustin Johnson