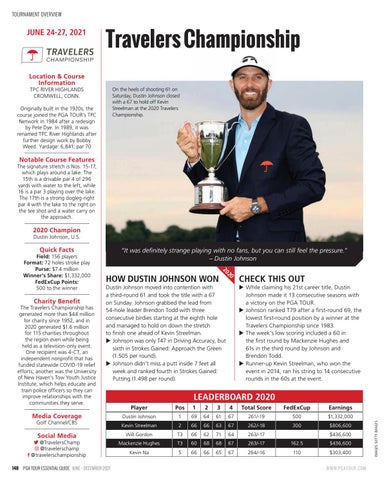 On the heels of shooting 61 on Saturday, Dustin Johnson closed with a 67 to hold off Kevin Streelman at the 2020 Travelers Championship.

Originally built in the 1920s, the course joined the PGA TOUR’s TPC Network in 1984 after a redesign by Pete Dye. In 1989, it was renamed TPC River Highlands after further design work by Bobby Weed. Yardage: 6,841; par 70

The signature stretch is Nos. 15-17, which plays around a lake. The 15th is a drivable par 4 of 296 yards with water to the left, while 16 is a par 3 playing over the lake. The 17th is a strong dogleg-right par 4 with the lake to the right on the tee shot and a water carry on the approach.

CHECK THIS OUT  While claiming his 21st career title, Dustin Johnson made it 13 consecutive seasons with a victory on the PGA TOUR.  Johnson ranked T79 after a first-round 69, the lowest first-round position by a winner at the Travelers Championship since 1983.  The week’s low scoring included a 60 in the first round by Mackenzie Hughes and 61s in the third round by Johnson and Brendon Todd.  Runner-up Kevin Streelman, who won the event in 2014, ran his string to 14 consecutive rounds in the 60s at the event.

Dustin Johnson moved into contention with a third-round 61 and took the title with a 67 on Sunday. Johnson grabbed the lead from 54-hole leader Brendon Todd with three consecutive birdies starting at the eighth hole and managed to hold on down the stretch to finish one ahead of Kevin Streelman.  Johnson was only T47 in Driving Accuracy, but sixth in Strokes Gained: Approach the Green (1.505 per round).  Johnson didn’t miss a putt inside 7 feet all week and ranked fourth in Strokes Gained: Putting (1.498 per round).

The Travelers Championship has generated more than $44 million for charity since 1952, and in 2020 generated $1.6 million for 115 charities throughout the region even while being held as a television-only event. One recipient was 4-CT, an independent nonprofit that has funded statewide COVID-19 relief efforts; another was the University of New Haven’s Tow Youth Justice Institute, which helps educate and train police officers so they can improve relationships with the communities they serve.

“It was definitely strange playing with no fans, but you can still feel the pressure.” – Dustin Johnson 20 20