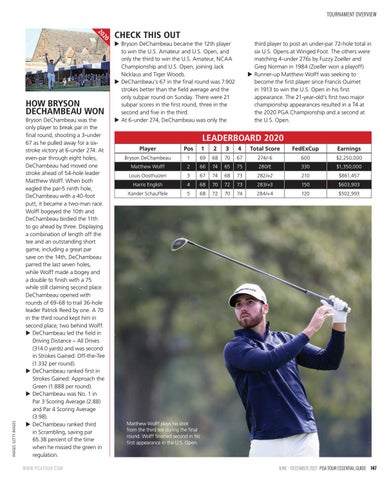 HOW BRYSON DECHAMBEAU WON Bryson DeChambeau was the only player to break par in the final round, shooting a 3-under 67 as he pulled away for a sixstroke victory at 6-under 274. At even-par through eight holes, DeChambeau had moved one stroke ahead of 54-hole leader Matthew Wolff. When both eagled the par-5 ninth hole, DeChambeau with a 40-foot putt, it became a two-man race. Wolff bogeyed the 10th and DeChambeau birdied the 11th to go ahead by three. Displaying a combination of length off the tee and an outstanding short game, including a great par save on the 14th, DeChambeau parred the last seven holes, while Wolff made a bogey and a double to finish with a 75 while still claiming second place. DeChambeau opened with rounds of 69-68 to trail 36-hole leader Patrick Reed by one. A 70 in the third round kept him in second place, two behind Wolff.  DeChambeau led the field in Driving Distance – All Drives (314.0 yards) and was second in Strokes Gained: Off-the-Tee (1.332 per round).  DeChambeau ranked first in Strokes Gained: Approach the Green (1.888 per round).  DeChambeau was No. 1 in Par 3 Scoring Average (2.88) and Par 4 Scoring Average (3.98).  DeChambeau ranked third in Scrambling, saving par 65.38 percent of the time when he missed the green in regulation. W W W.P GAT OUR.COM

CHECK THIS OUT  Bryson DeChambeau became the 12th player to win the U.S. Amateur and U.S. Open, and only the third to win the U.S. Amateur, NCAA Championship and U.S. Open, joining Jack Nicklaus and Tiger Woods.  DeChambeau’s 67 in the final round was 7.902 strokes better than the field average and the only subpar round on Sunday. There were 21 subpar scores in the first round, three in the second and five in the third.  At 6-under 274, DeChambeau was only the

third player to post an under-par 72-hole total in six U.S. Opens at Winged Foot. The others were matching 4-under 276s by Fuzzy Zoeller and Greg Norman in 1984 (Zoeller won a playoff).  Runner-up Matthew Wolff was seeking to become the first player since Francis Ouimet in 1913 to win the U.S. Open in his first appearance. The 21-year-old’s first two major championship appearances resulted in a T4 at the 2020 PGA Championship and a second at the U.S. Open.

Matthew Wolff plays his shot from the third tee during the final round. Wolff finished second in his first appearance in the U.S. Open.