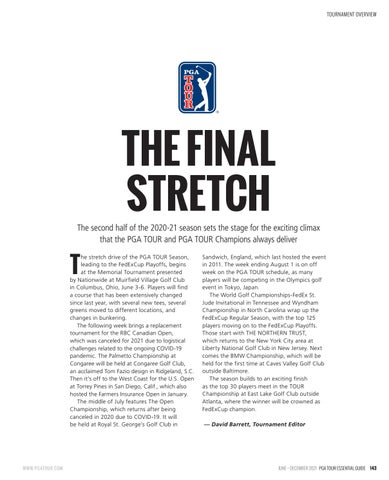 he stretch drive of the PGA TOUR Season, leading to the FedExCup Playoffs, begins at the Memorial Tournament presented by Nationwide at Muirfield Village Golf Club in Columbus, Ohio, June 3-6. Players will find a course that has been extensively changed since last year, with several new tees, several greens moved to different locations, and changes in bunkering. The following week brings a replacement tournament for the RBC Canadian Open, which was canceled for 2021 due to logistical challenges related to the ongoing COVID-19 pandemic. The Palmetto Championship at Congaree will be held at Congaree Golf Club, an acclaimed Tom Fazio design in Ridgeland, S.C. Then it’s off to the West Coast for the U.S. Open at Torrey Pines in San Diego, Calif., which also hosted the Farmers Insurance Open in January. The middle of July features The Open Championship, which returns after being canceled in 2020 due to COVID-19. It will be held at Royal St. George’s Golf Club in

Sandwich, England, which last hosted the event in 2011. The week ending August 1 is on off week on the PGA TOUR schedule, as many players will be competing in the Olympics golf event in Tokyo, Japan. The World Golf Championships-FedEx St. Jude Invitational in Tennessee and Wyndham Championship in North Carolina wrap up the FedExCup Regular Season, with the top 125 players moving on to the FedExCup Playoffs. Those start with THE NORTHERN TRUST, which returns to the New York City area at Liberty National Golf Club in New Jersey. Next comes the BMW Championship, which will be held for the first time at Caves Valley Golf Club outside Baltimore. The season builds to an exciting finish as the top 30 players meet in the TOUR Championship at East Lake Golf Club outside Atlanta, where the winner will be crowned as FedExCup champion. — David Barrett, Tournament Editor