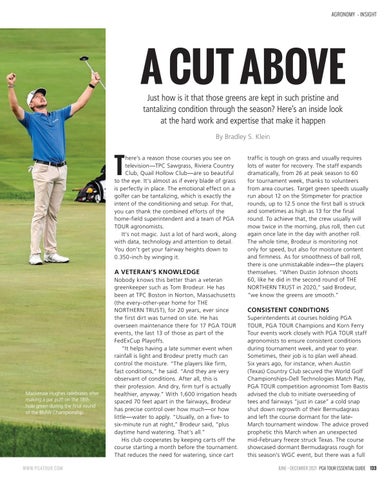 A CUT ABOVE Just how is it that those greens are kept in such pristine and tantalizing condition through the season? Here’s an inside look at the hard work and expertise that make it happen By Bradley S. Klein

here’s a reason those courses you see on television—TPC Sawgrass, Riviera Country Club, Quail Hollow Club—are so beautiful to the eye. It’s almost as if every blade of grass is perfectly in place. The emotional effect on a golfer can be tantalizing, which is exactly the intent of the conditioning and setup. For that, you can thank the combined efforts of the home-field superintendent and a team of PGA TOUR agronomists. It’s not magic. Just a lot of hard work, along with data, technology and attention to detail. You don’t get your fairway heights down to 0.350-inch by winging it.

Mackenzie Hughes celebrates after making a par putt on the 18th hole green during the final round of the BMW Championship.

Nobody knows this better than a veteran greenkeeper such as Tom Brodeur. He has been at TPC Boston in Norton, Massachusetts (the every-other-year home for THE NORTHERN TRUST), for 20 years, ever since the first dirt was turned on site. He has overseen maintenance there for 17 PGA TOUR events, the last 13 of those as part of the FedExCup Playoffs. “It helps having a late summer event when rainfall is light and Brodeur pretty much can control the moisture. “The players like firm, fast conditions,” he said. “And they are very observant of conditions. After all, this is their profession. And dry, firm turf is actually healthier, anyway.” With 1,600 irrigation heads spaced 70 feet apart in the fairways, Brodeur has precise control over how much—or how little—water to apply. “Usually, on a five- to six-minute run at night,” Brodeur said, “plus daytime hand watering. That’s all.” His club cooperates by keeping carts off the course starting a month before the tournament. That reduces the need for watering, since cart

traffic is tough on grass and usually requires lots of water for recovery. The staff expands dramatically, from 26 at peak season to 60 for tournament week, thanks to volunteers from area courses. Target green speeds usually run about 12 on the Stimpmeter for practice rounds, up to 12.5 once the first ball is struck and sometimes as high as 13 for the final round. To achieve that, the crew usually will mow twice in the morning, plus roll, then cut again once late in the day with another roll. The whole time, Brodeur is monitoring not only for speed, but also for moisture content and firmness. As for smoothness of ball roll, there is one unmistakable index—the players themselves. “When Dustin Johnson shoots 60, like he did in the second round of THE NORTHERN TRUST in 2020,” said Brodeur, “we know the greens are smooth.”