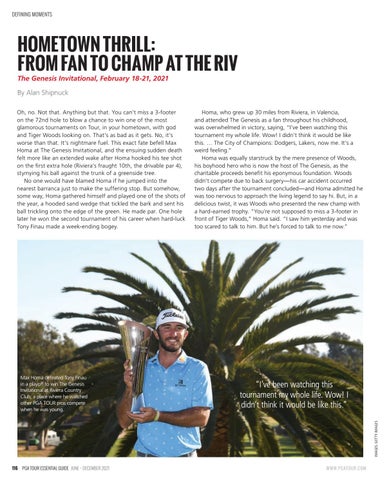 HOMETOWN THRILL: FROM FAN TO CHAMP AT THE RIV The Genesis Invitational, February 18-21, 2021 By Alan Shipnuck Oh, no. Not that. Anything but that. You can’t miss a 3-footer on the 72nd hole to blow a chance to win one of the most glamorous tournaments on Tour, in your hometown, with god and Tiger Woods looking on. That’s as bad as it gets. No, it’s worse than that. It’s nightmare fuel. This exact fate befell Max Homa at The Genesis Invitational, and the ensuing sudden death felt more like an extended wake after Homa hooked his tee shot on the first extra hole (Riviera’s fraught 10th, the drivable par 4), stymying his ball against the trunk of a greenside tree. No one would have blamed Homa if he jumped into the nearest barranca just to make the suffering stop. But somehow, some way, Homa gathered himself and played one of the shots of the year, a hooded sand wedge that tickled the bark and sent his ball trickling onto the edge of the green. He made par. One hole later he won the second tournament of his career when hard-luck Tony Finau made a week-ending bogey.

“I’ve been watching this tournament my whole life. Wow! I didn’t think it would be like this.” images: getty images

Max Homa defeated Tony Finau in a playoff to win The Genesis Invitational at Riviera Country Club, a place where he watched other PGA TOUR pros compete when he was young.

Homa, who grew up 30 miles from Riviera, in Valencia, and attended The Genesis as a fan throughout his childhood, was overwhelmed in victory, saying, “I’ve been watching this tournament my whole life. Wow! I didn’t think it would be like this. … The City of Champions: Dodgers, Lakers, now me. It’s a weird feeling.” Homa was equally starstruck by the mere presence of Woods, his boyhood hero who is now the host of The Genesis, as the charitable proceeds benefit his eponymous foundation. Woods didn’t compete due to back surgery—his car accident occurred two days after the tournament concluded—and Homa admitted he was too nervous to approach the living legend to say hi. But, in a delicious twist, it was Woods who presented the new champ with a hard-earned trophy. “You’re not supposed to miss a 3-footer in front of Tiger Woods,” Homa said. “I saw him yesterday and was too scared to talk to him. But he’s forced to talk to me now.”