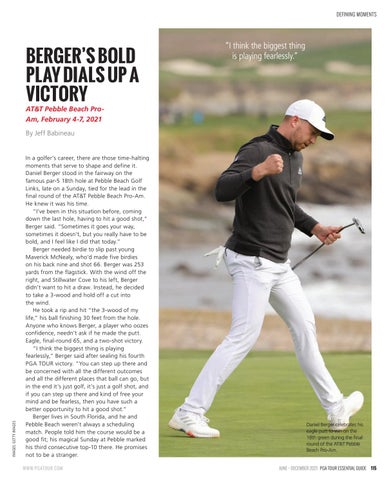 “I think the biggest thing is playing fearlessly.”

By Jeff Babineau In a golfer’s career, there are those time-halting moments that serve to shape and define it. Daniel Berger stood in the fairway on the famous par-5 18th hole at Pebble Beach Golf Links, late on a Sunday, tied for the lead in the final round of the AT&T Pebble Beach Pro-Am. He knew it was his time. “I’ve been in this situation before, coming down the last hole, having to hit a good shot,” Berger said. “Sometimes it goes your way, sometimes it doesn’t, but you really have to be bold, and I feel like I did that today.” Berger needed birdie to slip past young Maverick McNealy, who’d made five birdies on his back nine and shot 66. Berger was 253 yards from the flagstick. With the wind off the right, and Stillwater Cove to his left, Berger didn’t want to hit a draw. Instead, he decided to take a 3-wood and hold off a cut into the wind. He took a rip and hit “the 3-wood of my life,” his ball finishing 30 feet from the hole. Anyone who knows Berger, a player who oozes confidence, needn’t ask if he made the putt. Eagle, final-round 65, and a two-shot victory. “I think the biggest thing is playing fearlessly,” Berger said after sealing his fourth PGA TOUR victory. “You can step up there and be concerned with all the different outcomes and all the different places that ball can go, but in the end it’s just golf, it’s just a golf shot, and if you can step up there and kind of free your mind and be fearless, then you have such a better opportunity to hit a good shot.” Berger lives in South Florida, and he and Pebble Beach weren’t always a scheduling match. People told him the course would be a good fit; his magical Sunday at Pebble marked his third consecutive top-10 there. He promises not to be a stranger. w w w.p g atour.com

Daniel Berger celebrates his eagle putt to win on the 18th green during the final round of the AT&T Pebble Beach Pro-Am. June – December 2021  PGA TOUR ESSENTIAL GUIDE  115