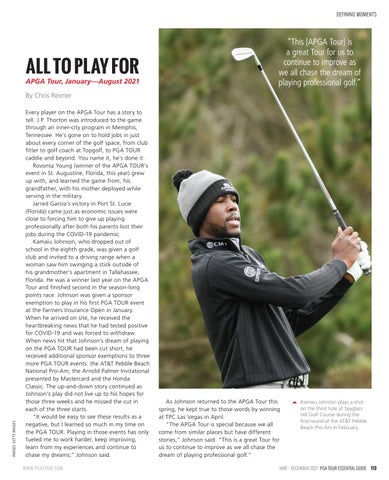 ALL TO PLAY FOR

“This [APGA Tour] is a great Tour for us to continue to improve as we all chase the dream of playing professional golf.”

By Chris Reimer Every player on the APGA Tour has a story to tell. J.P. Thorton was introduced to the game through an inner-city program in Memphis, Tennessee. He’s gone on to hold jobs in just about every corner of the golf space, from club fitter to golf coach at Topgolf, to PGA TOUR caddie and beyond. You name it, he’s done it. Rovonta Young (winner of the APGA TOUR’s event in St. Augustine, Florida, this year) grew up with, and learned the game from, his grandfather, with his mother deployed while serving in the military. Jarred Garcia’s victory in Port St. Lucie (Florida) came just as economic issues were close to forcing him to give up playing professionally after both his parents lost their jobs during the COVID-19 pandemic. Kamaiu Johnson, who dropped out of school in the eighth grade, was given a golf club and invited to a driving range when a woman saw him swinging a stick outside of his grandmother’s apartment in Tallahassee, Florida. He was a winner last year on the APGA Tour and finished second in the season-long points race. Johnson was given a sponsor exemption to play in his first PGA TOUR event at the Farmers Insurance Open in January. When he arrived on site, he received the heartbreaking news that he had tested positive for COVID-19 and was forced to withdraw. When news hit that Johnson’s dream of playing on the PGA TOUR had been cut short, he received additional sponsor exemptions to three more PGA TOUR events: the AT&T Pebble Beach National Pro-Am, the Arnold Palmer Invitational presented by Mastercard and the Honda Classic. The up-and-down story continued as Johnson’s play did not live up to his hopes for those three weeks and he missed the cut in each of the three starts. “It would be easy to see these results as a negative, but I learned so much in my time on the PGA TOUR. Playing in those events has only fueled me to work harder, keep improving, learn from my experiences and continue to chase my dreams,” Johnson said. w w w.p g atour.com

As Johnson returned to the APGA Tour this spring, he kept true to those words by winning at TPC Las Vegas in April. “The APGA Tour is special because we all come from similar places but have different stories,” Johnson said. “This is a great Tour for us to continue to improve as we all chase the dream of playing professional golf.”

on the third hole at Spyglass Hill Golf Course during the first round of the AT&T Pebble Beach Pro-Am in February.