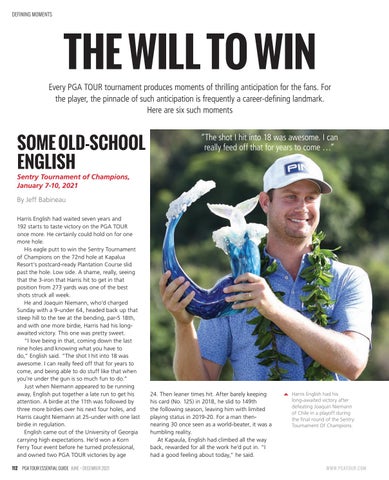 THE WILL TO WIN Every PGA TOUR tournament produces moments of thrilling anticipation for the fans. For the player, the pinnacle of such anticipation is frequently a career-defining landmark. Here are six such moments

“The shot I hit into 18 was awesome. I can really feed off that for years to come …”

Harris English had waited seven years and 192 starts to taste victory on the PGA TOUR once more. He certainly could hold on for one more hole. His eagle putt to win the Sentry Tournament of Champions on the 72nd hole at Kapalua Resort’s postcard-ready Plantation Course slid past the hole. Low side. A shame, really, seeing that the 3-iron that Harris hit to get in that position from 273 yards was one of the best shots struck all week. He and Joaquin Niemann, who’d charged Sunday with a 9-under 64, headed back up that steep hill to the tee at the bending, par-5 18th, and with one more birdie, Harris had his longawaited victory. This one was pretty sweet. “I love being in that, coming down the last nine holes and knowing what you have to do,” English said. “The shot I hit into 18 was awesome. I can really feed off that for years to come, and being able to do stuff like that when you’re under the gun is so much fun to do.” Just when Niemann appeared to be running away, English put together a late run to get his attention. A birdie at the 11th was followed by three more birdies over his next four holes, and Harris caught Niemann at 25-under with one last birdie in regulation. English came out of the University of Georgia carrying high expectations. He’d won a Korn Ferry Tour event before he turned professional, and owned two PGA TOUR victories by age 112  PGA TOUR ESSENTIAL GUIDE  June – December 2021

24. Then leaner times hit. After barely keeping his card (No. 125) in 2018, he slid to 149th the following season, leaving him with limited playing status in 2019-20. For a man thennearing 30 once seen as a world-beater, it was a humbling reality. At Kapaula, English had climbed all the way back, rewarded for all the work he’d put in. “I had a good feeling about today,” he said.

aa Harris English had his

long-awaited victory after defeating Joaquin Niemann of Chile in a playoff during the final round of the Sentry Tournament Of Champions.