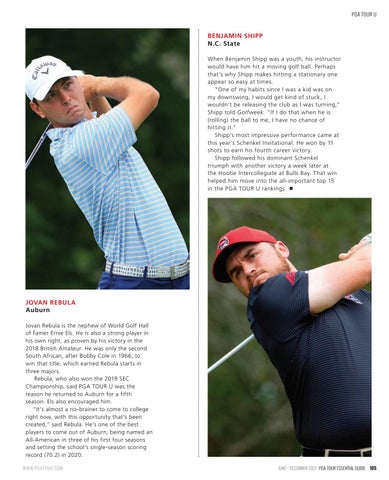 BENJAMIN SHIPP N.C. State When Benjamin Shipp was a youth, his instructor would have him hit a moving golf ball. Perhaps that’s why Shipp makes hitting a stationary one appear so easy at times. “One of my habits since I was a kid was on my downswing, I would get kind of stuck, I wouldn’t be releasing the club as I was turning,” Shipp told Golfweek. “If I do that when he is (rolling) the ball to me, I have no chance of hitting it.” Shipp’s most impressive performance came at this year’s Schenkel Invitational. He won by 11 shots to earn his fourth career victory. Shipp followed his dominant Schenkel triumph with another victory a week later at the Hootie Intercollegiate at Bulls Bay. That win helped him move into the all-important top 15 in the PGA TOUR U rankings. 

JOVAN REBULA Auburn Jovan Rebula is the nephew of World Golf Hall of Famer Ernie Els. He is also a strong player in his own right, as proven by his victory in the 2018 British Amateur. He was only the second South African, after Bobby Cole in 1966, to win that title, which earned Rebula starts in three majors. Rebula, who also won the 2019 SEC Championship, said PGA TOUR U was the reason he returned to Auburn for a fifth season. Els also encouraged him. “It’s almost a no-brainer to come to college right now, with this opportunity that’s been created,” said Rebula. He’s one of the best players to come out of Auburn, being named an All-American in three of his first four seasons and setting the school’s single-season scoring record (70.2) in 2020. w w w.p gat our.com