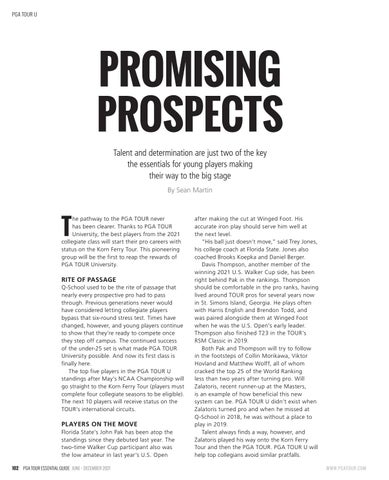 he pathway to the PGA TOUR never has been clearer. Thanks to PGA TOUR University, the best players from the 2021 collegiate class will start their pro careers with status on the Korn Ferry Tour. This pioneering group will be the first to reap the rewards of PGA TOUR University.

Rite of passage Q-School used to be the rite of passage that nearly every prospective pro had to pass through. Previous generations never would have considered letting collegiate players bypass that six-round stress test. Times have changed, however, and young players continue to show that they’re ready to compete once they step off campus. The continued success of the under-25 set is what made PGA TOUR University possible. And now its first class is finally here. The top five players in the PGA TOUR U standings after May’s NCAA Championship will go straight to the Korn Ferry Tour (players must complete four collegiate seasons to be eligible). The next 10 players will receive status on the TOUR’s international circuits.

PLAYERS ON THE MOVE Florida State’s John Pak has been atop the standings since they debuted last year. The two-time Walker Cup participant also was the low amateur in last year’s U.S. Open 102  PGA TOUR ESSENTIAL GUIDE  June – December 2021

after making the cut at Winged Foot. His accurate iron play should serve him well at the next level. “His ball just doesn’t move,” said Trey Jones, his college coach at Florida State. Jones also coached Brooks Koepka and Daniel Berger. Davis Thompson, another member of the winning 2021 U.S. Walker Cup side, has been right behind Pak in the rankings. Thompson should be comfortable in the pro ranks, having lived around TOUR pros for several years now in St. Simons Island, Georgia. He plays often with Harris English and Brendon Todd, and was paired alongside them at Winged Foot when he was the U.S. Open’s early leader. Thompson also finished T23 in the TOUR’s RSM Classic in 2019. Both Pak and Thompson will try to follow in the footsteps of Collin Morikawa, Viktor Hovland and Matthew Wolff, all of whom cracked the top 25 of the World Ranking less than two years after turning pro. Will Zalatoris, recent runner-up at the Masters, is an example of how beneficial this new system can be. PGA TOUR U didn’t exist when Zalatoris turned pro and when he missed at Q-School in 2018, he was without a place to play in 2019. Talent always finds a way, however, and Zalatoris played his way onto the Korn Ferry Tour and then the PGA TOUR. PGA TOUR U will help top collegians avoid similar pratfalls. w w w.p gat our.com