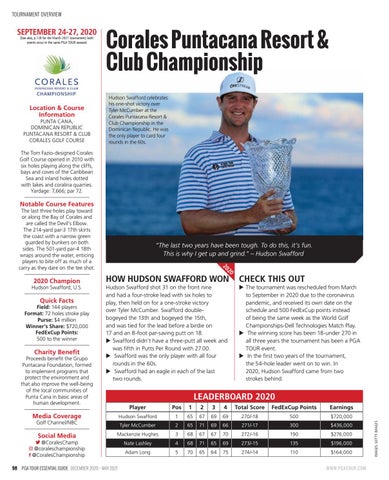 The Tom Fazio-designed Corales Golf Course opened in 2010 with six holes playing along the cliffs, bays and coves of the Caribbean Sea and inland holes dotted with lakes and coralina quarries. Yardage: 7,666; par 72.

The last three holes play toward or along the Bay of Corales and are called the Devil’s Elbow. The 214-yard par-3 17th skirts the coast with a narrow green guarded by bunkers on both sides. The 501-yard par-4 18th wraps around the water, enticing players to bite off as much of a carry as they dare on the tee shot.

Proceeds benefit the Grupo Puntacana Foundation, formed to implement programs that protect the environment and that also improve the well-being of the local communities of Punta Cana in basic areas of human development.

Hudson Swafford shot 31 on the front nine and had a four-stroke lead with six holes to play, then held on for a one-stroke victory over Tyler McCumber. Swafford doublebogeyed the 13th and bogeyed the 15th, and was tied for the lead before a birdie on 17 and an 8-foot par-saving putt on 18.  Swafford didn’t have a three-putt all week and was fifth in Putts Per Round with 27.00.  Swafford was the only player with all four rounds in the 60s.  Swafford had an eagle in each of the last two rounds.

 The tournament was rescheduled from March to September in 2020 due to the coronavirus pandemic, and received its own date on the schedule and 500 FedExCup points instead of being the same week as the World Golf Championships-Dell Technologies Match Play.  The winning score has been 18-under 270 in all three years the tournament has been a PGA TOUR event.  In the first two years of the tournament, the 54-hole leader went on to win. In 2020, Hudson Swafford came from two strokes behind.

“The last two years have been tough. To do this, it’s fun. This is why I get up and grind.” – Hudson Swafford