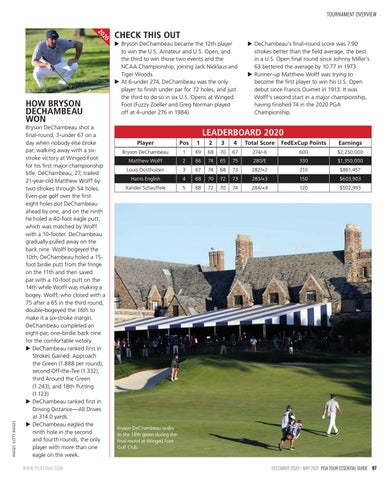 HOW BRYSON DECHAMBEAU WON Bryson DeChambeau shot a final-round, 3-under 67 on a day when nobody else broke par, walking away with a sixstroke victory at Winged Foot for his first major championship title. DeChambeau, 27, trailed 21-year-old Matthew Wolff by two strokes through 54 holes. Even-par golf over the first eight holes put DeChambeau ahead by one, and on the ninth he holed a 40-foot eagle putt, which was matched by Wolff with a 10-footer. DeChambeau gradually pulled away on the back nine. Wolff bogeyed the 10th; DeChambeau holed a 15foot birdie putt from the fringe on the 11th and then saved par with a 10-foot putt on the 14th while Wolff was making a bogey. Wolff, who closed with a 75 after a 65 in the third round, double-bogeyed the 16th to make it a six-stroke margin. DeChambeau completed an eight-par, one-birdie back nine for the comfortable victory. X DeChambeau ranked first in Strokes Gained: Approach the Green (1.888 per round), second Off-the-Tee (1.332), third Around the Green (1.243), and 18th Putting (1.123). X DeChambeau ranked first in Driving Distance—All Drives at 314.0 yards. X DeChambeau eagled the ninth hole in the second and fourth rounds, the only player with more than one eagle on the week. w w w.p gat our.com

CHECk tHiS OUt X Bryson DeChambeau became the 12th player to win the U.S. Amateur and U.S. Open, and the third to win those two events and the NCAA Championship, joining Jack Nicklaus and Tiger Woods. X At 6-under 274, DeChambeau was the only player to finish under par for 72 holes, and just the third to do so in six U.S. Opens at Winged Foot (Fuzzy Zoeller and Greg Norman played off at 4-under 276 in 1984).

X DeChambeau’s final-round score was 7.90 strokes better than the field average, the best in a U.S. Open final round since Johnny Miller’s 63 bettered the average by 10.77 in 1973. X Runner-up Matthew Wolff was trying to become the first player to win his U.S. Open debut since Francis Ouimet in 1913. It was Wolff’s second start in a major championship, having finished T4 in the 2020 PGA Championship.

Bryson DeChambeau walks to the 18th green during the final round at Winged Foot Golf Club.