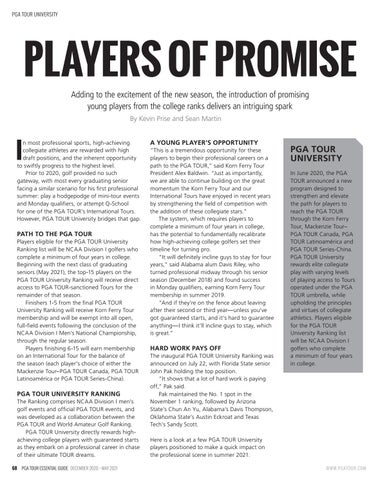 PLAYERS OF PROMISE Adding to the excitement of the new season, the introduction of promising young players from the college ranks delivers an intriguing spark By Kevin Prise and Sean Martin

n most professional sports, high-achieving collegiate athletes are rewarded with high draft positions, and the inherent opportunity to swiftly progress to the highest level. Prior to 2020, golf provided no such gateway, with most every graduating senior facing a similar scenario for his first professional summer: play a hodgepodge of mini-tour events and Monday qualifiers, or attempt Q-School for one of the PGA TOUR’s International Tours. However, PGA TOUR University bridges that gap.

Path to the PGa toUR Players eligible for the PGA TOUR University Ranking list will be NCAA Division I golfers who complete a minimum of four years in college. Beginning with the next class of graduating seniors (May 2021), the top-15 players on the PGA TOUR University Ranking will receive direct access to PGA TOUR-sanctioned Tours for the remainder of that season. Finishers 1-5 from the final PGA TOUR University Ranking will receive Korn Ferry Tour membership and will be exempt into all open, full-field events following the conclusion of the NCAA Division I Men’s National Championship, through the regular season. Players finishing 6-15 will earn membership on an International Tour for the balance of the season (each player’s choice of either the Mackenzie Tour–PGA TOUR Canada, PGA TOUR Latinoamérica or PGA TOUR Series-China).

PGa toUR UniveRsity RankinG The Ranking comprises NCAA Division I men’s golf events and official PGA TOUR events, and was developed as a collaboration between the PGA TOUR and World Amateur Golf Ranking. PGA TOUR University directly rewards highachieving college players with guaranteed starts as they embark on a professional career in chase of their ultimate TOUR dreams. 68

a yoUnG PlayeR’s oPPoRtUnity “This is a tremendous opportunity for these players to begin their professional careers on a path to the PGA TOUR,” said Korn Ferry Tour President Alex Baldwin. “Just as importantly, we are able to continue building on the great momentum the Korn Ferry Tour and our International Tours have enjoyed in recent years by strengthening the field of competition with the addition of these collegiate stars.” The system, which requires players to complete a minimum of four years in college, has the potential to fundamentally recalibrate how high-achieving college golfers set their timeline for turning pro. “It will definitely incline guys to stay for four years,” said Alabama alum Davis Riley, who turned professional midway through his senior season (December 2018) and found success in Monday qualifiers, earning Korn Ferry Tour membership in summer 2019. “And if they’re on the fence about leaving after their second or third year—unless you’ve got guaranteed starts, and it’s hard to guarantee anything—I think it’ll incline guys to stay, which is great.”

PGa toUR UniveRsity In June 2020, the PGA TOUR announced a new program designed to strengthen and elevate the path for players to reach the PGA TOUR through the Korn Ferry Tour, Mackenzie Tour– PGA TOUR Canada, PGA TOUR Latinoamérica and PGA TOUR Series-China. PGA TOUR University rewards elite collegiate play with varying levels of playing access to Tours operated under the PGA TOUR umbrella, while upholding the principles and virtues of collegiate athletics. Players eligible for the PGA TOUR University Ranking list will be NCAA Division I golfers who complete a minimum of four years in college.

Here is a look at a few PGA TOUR University players positioned to make a quick impact on the professional scene in summer 2021. w w w.P GAT OUR.cOm