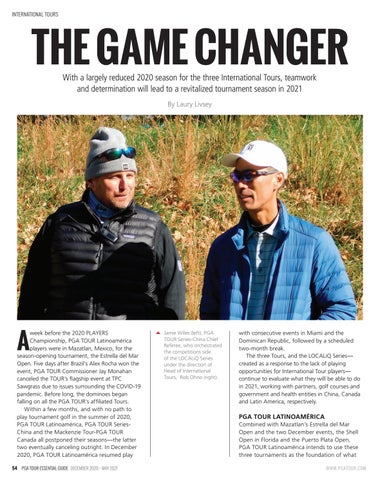 THE GAME CHANGER With a largely reduced 2020 season for the three International Tours, teamwork and determination will lead to a revitalized tournament season in 2021 By Laury Livsey

week before the 2020 PLAYERS Championship, PGA TOUR Latinoamérica players were in Mazatlan, Mexico, for the season-opening tournament, the Estrella del Mar Open. Five days after Brazil’s Alex Rocha won the event, PGA TOUR Commissioner Jay Monahan canceled the TOUR’s flagship event at TPC Sawgrass due to issues surrounding the COVID-19 pandemic. Before long, the dominoes began falling on all the PGA TOUR’s affiliated Tours. Within a few months, and with no path to play tournament golf in the summer of 2020, PGA TOUR Latinoamérica, PGA TOUR SeriesChina and the Mackenzie Tour-PGA TOUR Canada all postponed their seasons—the latter two eventually canceling outright. In December 2020, PGA TOUR Latinoamérica resumed play

Jamie Wiles (left), PGA TOUR Series-China Chief Referee, who orchestrated the competitions side of the LOCALiQ Series under the direction of Head of International Tours, Rob Ohno (right).

with consecutive events in Miami and the Dominican Republic, followed by a scheduled two-month break. The three Tours, and the LOCALiQ Series— created as a response to the lack of playing opportunities for International Tour players— continue to evaluate what they will be able to do in 2021, working with partners, golf courses and government and health entities in China, Canada and Latin America, respectively.

PGA TOUR LATinOAméRicA Combined with Mazatlan’s Estrella del Mar Open and the two December events, the Shell Open in Florida and the Puerto Plata Open, PGA TOUR Latinoamérica intends to use these three tournaments as the foundation of what w w w.p g AT OUR.cOm