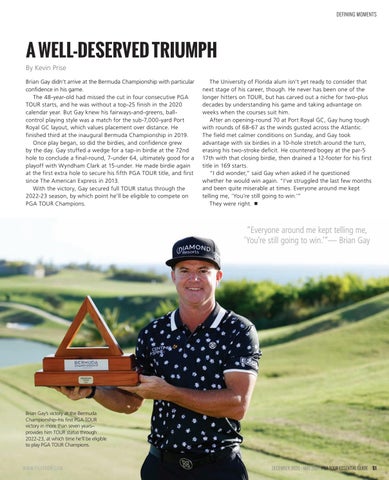 A WELL-DESERVED TRIUMPH By Kevin Prise Brian Gay didn’t arrive at the Bermuda Championship with particular confidence in his game. The 48-year-old had missed the cut in four consecutive PGA TOUR starts, and he was without a top-25 finish in the 2020 calendar year. But Gay knew his fairways-and-greens, ballcontrol playing style was a match for the sub-7,000-yard Port Royal GC layout, which values placement over distance. He finished third at the inaugural Bermuda Championship in 2019. Once play began, so did the birdies, and confidence grew by the day. Gay stuffed a wedge for a tap-in birdie at the 72nd hole to conclude a final-round, 7-under 64, ultimately good for a playoff with Wyndham Clark at 15-under. He made birdie again at the first extra hole to secure his fifth PGA TOUR title, and first since The American Express in 2013. With the victory, Gay secured full TOUR status through the 2022-23 season, by which point he’ll be eligible to compete on PGA TOUR Champions.

The University of Florida alum isn’t yet ready to consider that next stage of his career, though. He never has been one of the longer hitters on TOUR, but has carved out a niche for two-plus decades by understanding his game and taking advantage on weeks when the courses suit him. After an opening-round 70 at Port Royal GC, Gay hung tough with rounds of 68-67 as the winds gusted across the Atlantic. The field met calmer conditions on Sunday, and Gay took advantage with six birdies in a 10-hole stretch around the turn, erasing his two-stroke deficit. He countered bogey at the par-5 17th with that closing birdie, then drained a 12-footer for his first title in 169 starts. “I did wonder,” said Gay when asked if he questioned whether he would win again. “I’ve struggled the last few months and been quite miserable at times. Everyone around me kept telling me, ‘You’re still going to win.’” They were right. 

“Everyone around me kept telling me, ‘You’re still going to win.’”— Brian Gay

Brian Gay’s victory at the Bermuda Championship–his first PGA TOUR victory in more than seven years– provides him TOUR status through 2022-23, at which time he’ll be eligible to play PGA TOUR Champions.