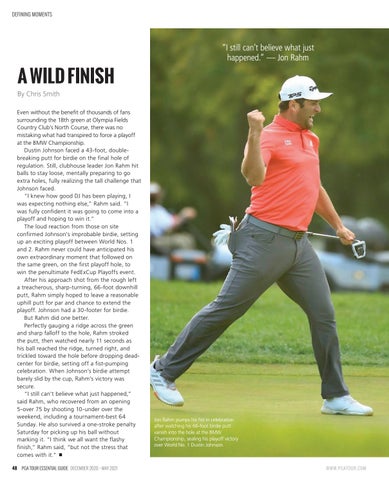 By Chris Smith Even without the benefit of thousands of fans surrounding the 18th green at Olympia Fields Country Club’s North Course, there was no mistaking what had transpired to force a playoff at the BMW Championship. Dustin Johnson faced a 43-foot, doublebreaking putt for birdie on the final hole of regulation. Still, clubhouse leader Jon Rahm hit balls to stay loose, mentally preparing to go extra holes, fully realizing the tall challenge that Johnson faced. “I knew how good DJ has been playing, I was expecting nothing else,” Rahm said. “I was fully confident it was going to come into a playoff and hoping to win it.” The loud reaction from those on site confirmed Johnson’s improbable birdie, setting up an exciting playoff between World Nos. 1 and 2. Rahm never could have anticipated his own extraordinary moment that followed on the same green, on the first playoff hole, to win the penultimate FedExCup Playoffs event. After his approach shot from the rough left a treacherous, sharp-turning, 66-foot downhill putt, Rahm simply hoped to leave a reasonable uphill putt for par and chance to extend the playoff. Johnson had a 30-footer for birdie. But Rahm did one better. Perfectly gauging a ridge across the green and sharp falloff to the hole, Rahm stroked the putt, then watched nearly 11 seconds as his ball reached the ridge, turned right, and trickled toward the hole before dropping deadcenter for birdie, setting off a fist-pumping celebration. When Johnson’s birdie attempt barely slid by the cup, Rahm’s victory was secure. “I still can’t believe what just happened,” said Rahm, who recovered from an opening 5-over 75 by shooting 10-under over the weekend, including a tournament-best 64 Sunday. He also survived a one-stroke penalty Saturday for picking up his ball without marking it. “I think we all want the flashy finish,” Rahm said, “but not the stress that comes with it.”  48

Jon Rahm pumps his fist in celebration after watching his 66-foot birdie putt vanish into the hole at the BMW Championship, sealing his playoff victory over World No. 1 Dustin Johnson.