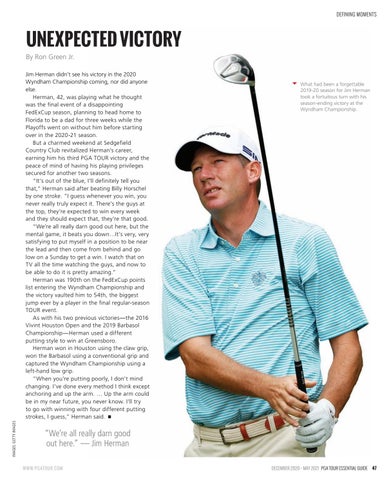 Jim Herman didn’t see his victory in the 2020 Wyndham Championship coming, nor did anyone else. Herman, 42, was playing what he thought was the final event of a disappointing FedExCup season, planning to head home to Florida to be a dad for three weeks while the Playoffs went on without him before starting over in the 2020-21 season. But a charmed weekend at Sedgefield Country Club revitalized Herman’s career, earning him his third PGA TOUR victory and the peace of mind of having his playing privileges secured for another two seasons. “It’s out of the blue, I’ll definitely tell you that,” Herman said after beating Billy Horschel by one stroke. “I guess whenever you win, you never really truly expect it. There’s the guys at the top, they’re expected to win every week and they should expect that, they’re that good. “We’re all really darn good out here, but the mental game, it beats you down…It’s very, very satisfying to put myself in a position to be near the lead and then come from behind and go low on a Sunday to get a win. I watch that on TV all the time watching the guys, and now to be able to do it is pretty amazing.” Herman was 190th on the FedExCup points list entering the Wyndham Championship and the victory vaulted him to 54th, the biggest jump ever by a player in the final regular-season TOUR event. As with his two previous victories—the 2016 Vivint Houston Open and the 2019 Barbasol Championship—Herman used a different putting style to win at Greensboro. Herman won in Houston using the claw grip, won the Barbasol using a conventional grip and captured the Wyndham Championship using a left-hand low grip. “When you’re putting poorly, I don’t mind changing. I’ve done every method I think except anchoring and up the arm. … Up the arm could be in my near future, you never know. I’ll try to go with winning with four different putting strokes, I guess,” Herman said. 

What had been a forgettable 2019-20 season for Jim Herman took a fortuitous turn with his season-ending victory at the Wyndham Championship.