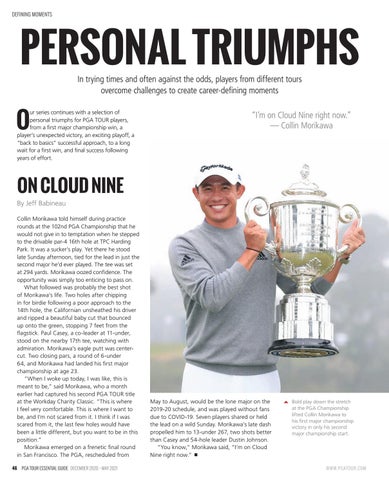 PERSONAL TRIUMPHS In trying times and often against the odds, players from different tours overcome challenges to create career-defining moments

ur series continues with a selection of personal triumphs for PGA TOUR players, from a first major championship win, a player’s unexpected victory, an exciting playoff, a “back to basics” successful approach, to a long wait for a first win, and final success following years of effort.

ON CLOUD NINE By Jeff Babineau Collin Morikawa told himself during practice rounds at the 102nd PGA Championship that he would not give in to temptation when he stepped to the drivable par-4 16th hole at TPC Harding Park. It was a sucker’s play. Yet there he stood late Sunday afternoon, tied for the lead in just the second major he’d ever played. The tee was set at 294 yards. Morikawa oozed confidence. The opportunity was simply too enticing to pass on. What followed was probably the best shot of Morikawa’s life. Two holes after chipping in for birdie following a poor approach to the 14th hole, the Californian unsheathed his driver and ripped a beautiful baby cut that bounced up onto the green, stopping 7 feet from the flagstick. Paul Casey, a co-leader at 11-under, stood on the nearby 17th tee, watching with admiration. Morikawa’s eagle putt was centercut. Two closing pars, a round of 6-under 64, and Morikawa had landed his first major championship at age 23. “When I woke up today, I was like, this is meant to be,” said Morikawa, who a month earlier had captured his second PGA TOUR title at the Workday Charity Classic. “This is where I feel very comfortable. This is where I want to be, and I’m not scared from it. I think if I was scared from it, the last few holes would have been a little different, but you want to be in this position.” Morikawa emerged on a frenetic final round in San Francisco. The PGA, rescheduled from 46

May to August, would be the lone major on the 2019-20 schedule, and was played without fans due to COVID-19. Seven players shared or held the lead on a wild Sunday. Morikawa’s late dash propelled him to 13-under 267, two shots better than Casey and 54-hole leader Dustin Johnson. “You know,” Morikawa said, “I’m on Cloud Nine right now.” 