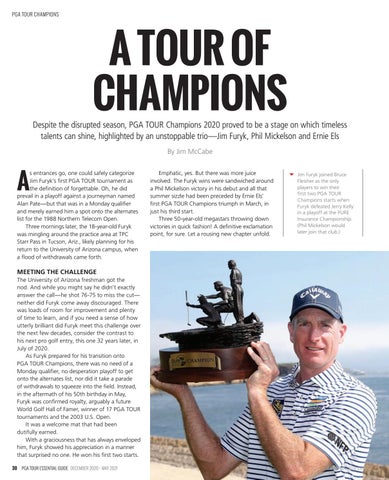 A Tour of ChAmpions

Despite the disrupted season, PGA TOUR Champions 2020 proved to be a stage on which timeless talents can shine, highlighted by an unstoppable trio—Jim Furyk, Phil Mickelson and Ernie Els By Jim McCabe

s entrances go, one could safely categorize Jim Furyk’s first PGA TOUR tournament as the definition of forgettable. Oh, he did prevail in a playoff against a journeyman named Alan Pate—but that was in a Monday qualifier and merely earned him a spot onto the alternates list for the 1988 Northern Telecom Open. Three mornings later, the 18-year-old Furyk was mingling around the practice area at TPC Starr Pass in Tucson, Ariz., likely planning for his return to the University of Arizona campus, when a flood of withdrawals came forth.

Emphatic, yes. But there was more juice involved. The Furyk wins were sandwiched around a Phil Mickelson victory in his debut and all that summer sizzle had been preceded by Ernie Els’ first PGA TOUR Champions triumph in March, in just his third start. Three 50-year-old megastars throwing down victories in quick fashion! A definitive exclamation point, for sure. Let a rousing new chapter unfold.

Jim Furyk joined Bruce Fleisher as the only players to win their first two PGA TOUR Champions starts when Furyk defeated Jerry Kelly in a playoff at the PURE Insurance Championship. (Phil Mickelson would later join that club.)

Meeting the challenge The University of Arizona freshman got the nod. And while you might say he didn’t exactly answer the call—he shot 76-75 to miss the cut— neither did Furyk come away discouraged. There was loads of room for improvement and plenty of time to learn, and if you need a sense of how utterly brilliant did Furyk meet this challenge over the next few decades, consider the contrast to his next pro golf entry, this one 32 years later, in July of 2020. As Furyk prepared for his transition onto PGA TOUR Champions, there was no need of a Monday qualifier, no desperation playoff to get onto the alternates list, nor did it take a parade of withdrawals to squeeze into the field. Instead, in the aftermath of his 50th birthday in May, Furyk was confirmed royalty, arguably a future World Golf Hall of Famer, winner of 17 PGA TOUR tournaments and the 2003 U.S. Open. It was a welcome mat that had been dutifully earned. With a graciousness that has always enveloped him, Furyk showed his appreciation in a manner that surprised no one. He won his first two starts. 30