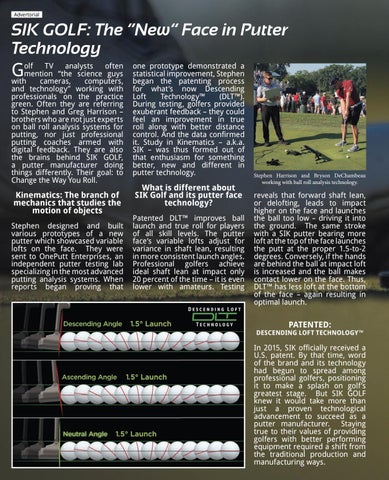 and technology” working with professionals on the practice green. Often they are referring to Stephen and Greg Harrison – brothers who are not just experts on ball roll analysis systems for putting, nor just professional putting coaches armed with digital feedback. They are also the brains behind SIK GOLF, a putter manufacturer doing things differently. Their goal: to Change the Way You Roll.

Kinematics: The branch of mechanics that studies the motion of objects Stephen designed and built various prototypes of a new putter which showcased variable lofts on the face. They were sent to OnePutt Enterprises, an independent putter testing lab specializing in the most advanced putting analysis systems. When reports began proving that

one prototype demonstrated a statistical improvement, Stephen began the patenting process for what’s now Descending Loft Technology™ (DLT™). During testing, golfers provided exuberant feedback – they could feel an improvement in true roll along with better distance control. And the data confirmed it. Study in Kinematics – a.k.a. SIK – was thus formed out of that enthusiasm for something better, new and different in putter technology.

What is different about SIK Golf and its putter face technology? Patented DLT™ improves ball launch and true roll for players of all skill levels. The putter face’s variable lofts adjust for variance in shaft lean, resulting in more consistent launch angles. Professional golfers achieve ideal shaft lean at impact only 20 percent of the time – it is even lower with amateurs. Testing

reveals that forward shaft lean, or delofting, leads to impact higher on the face and launches the ball too low – driving it into the ground. The same stroke with a SIK putter bearing more loft at the top of the face launches the putt at the proper 1.5-to-2 degrees. Conversely, if the hands are behind the ball at impact loft is increased and the ball makes contact lower on the face. Thus, DLT™ has less loft at the bottom of the face – again resulting in optimal launch.

In 2015, SIK officially received a U.S. patent. By that time, word of the brand and its technology had begun to spread among professional golfers, positioning it to make a splash on golf’s greatest stage. But SIK GOLF knew it would take more than just a proven technological advancement to succeed as a putter manufacturer. Staying true to their values of providing golfers with better performing equipment required a shift from the traditional production and manufacturing ways.