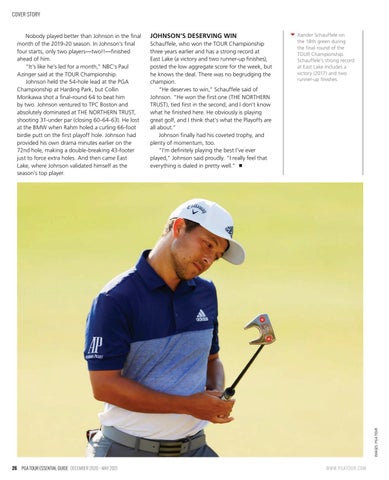 Johnson’s deserving win Schauffele, who won the TOUR Championship three years earlier and has a strong record at East Lake (a victory and two runner-up finishes), posted the low aggregate score for the week, but he knows the deal. There was no begrudging the champion. “He deserves to win,” Schauffele said of Johnson. “He won the first one (THE NORTHERN TRUST), tied first in the second, and I don’t know what he finished here. He obviously is playing great golf, and I think that’s what the Playoffs are all about.” Johnson finally had his coveted trophy, and plenty of momentum, too. “I’m definitely playing the best I’ve ever played,” Johnson said proudly. “I really feel that everything is dialed in pretty well.” 

b Xander Schauffele on the 18th green during the final round of the TOUR Championship. Schauffele’s strong record at East Lake includes a victory (2017) and two runner-up finishes.

Nobody played better than Johnson in the final month of the 2019-20 season. In Johnson’s final four starts, only two players—two!!—finished ahead of him. “It’s like he’s led for a month,” NBC’s Paul Azinger said at the TOUR Championship. Johnson held the 54-hole lead at the PGA Championship at Harding Park, but Collin Morikawa shot a final-round 64 to beat him by two. Johnson ventured to TPC Boston and absolutely dominated at THE NORTHERN TRUST, shooting 31-under par (closing 60-64-63). He lost at the BMW when Rahm holed a curling 66-foot birdie putt on the first playoff hole. Johnson had provided his own drama minutes earlier on the 72nd hole, making a double-breaking 43-footer just to force extra holes. And then came East Lake, where Johnson validated himself as the season’s top player.