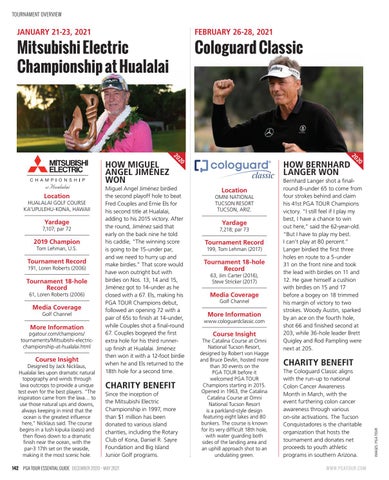 Designed by Jack Nicklaus, Hualalai lies upon dramatic natural topography and winds through lava outcrops to provide a unique test even for the best players. “The inspiration came from the lava… to use those natural ups and downs, always keeping in mind that the ocean is the greatest influence here,” Nicklaus said. The course begins in a lush kipuka (oasis) and then flows down to a dramatic finish near the ocean, with the par-3 17th set on the seaside, making it the most scenic hole. 142

Miguel Angel Jiménez birdied the second playoff hole to beat Fred Couples and Ernie Els for his second title at Hualalai, adding to his 2015 victory. After the round, Jiménez said that early on the back nine he told his caddie, “The winning score is going to be 15-under par, and we need to hurry up and make birdies.” That score would have won outright but with birdies on Nos. 13, 14 and 15, Jiménez got to 14-under as he closed with a 67. Els, making his PGA TOUR Champions debut, followed an opening 72 with a pair of 65s to finish at 14-under, while Couples shot a final-round 67. Couples bogeyed the first extra hole for his third runnerup finish at Hualalai. Jiménez then won it with a 12-foot birdie when he and Els returned to the 18th hole for a second time.

CHARITY BENEFIT Since the inception of the Mitsubishi Electric Championship in 1997, more than $1 million has been donated to various island charities, including the Rotary Club of Kona, Daniel R. Sayre Foundation and Big Island Junior Golf programs.

The Catalina Course at Omni National Tucson Resort, designed by Robert von Hagge and Bruce Devlin, hosted more than 30 events on the PGA TOUR before it welcomed PGA TOUR Champions starting in 2015. Opened in 1963, the Catalina Catalina Course at Omni National Tucson Resort is a parkland-style design featuring eight lakes and 80 bunkers. The course is known for its very difficult 18th hole, with water guarding both sides of the landing area and an uphill approach shot to an undulating green.

Bernhard Langer shot a finalround 8-under 65 to come from four strokes behind and claim his 41st PGA TOUR Champions victory. “I still feel if I play my best, I have a chance to win out here,” said the 62-year-old. “But I have to play my best. I can’t play at 80 percent.” Langer birdied the first three holes en route to a 5-under 31 on the front nine and took the lead with birdies on 11 and 12. He gave himself a cushion with birdies on 15 and 17 before a bogey on 18 trimmed his margin of victory to two strokes. Woody Austin, sparked by an ace on the fourth hole, shot 66 and finished second at 203, while 36-hole leader Brett Quigley and Rod Pampling were next at 205.

CHARITY BENEFIT The Cologuard Classic aligns with the run-up to national Colon Cancer Awareness Month in March, with the event furthering colon cancer awareness through various on-site activations. The Tucson Conquistadores is the charitable organization that hosts the tournament and donates net proceeds to youth athletic programs in southern Arizona.