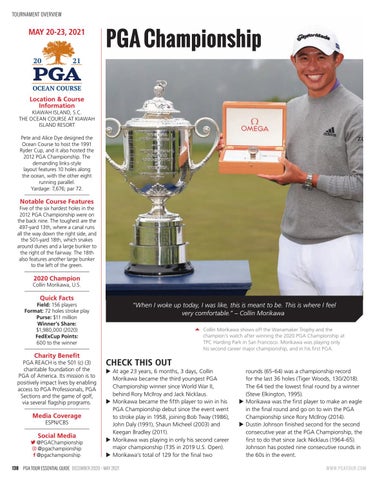 KIAWAH ISLAND, S.C. THE OCEAN COURSE AT KIAWAH ISLAND RESORT Pete and Alice Dye designed the Ocean Course to host the 1991 Ryder Cup, and it also hosted the 2012 PGA Championship. The demanding links-style layout features 10 holes along the ocean, with the other eight running parallel. Yardage: 7,676; par 72.

Five of the six hardest holes in the 2012 PGA Championship were on the back nine. The toughest are the 497-yard 13th, where a canal runs all the way down the right side, and the 501-yard 18th, which snakes around dunes and a large bunker to the right of the fairway. The 18th also features another large bunker to the left of the green.

“When I woke up today, I was like, this is meant to be. This is where I feel very comfortable.” – Collin Morikawa

PGA REACH is the 501 (c) (3) charitable foundation of the PGA of America. Its mission is to positively impact lives by enabling access to PGA Professionals, PGA Sections and the game of golf, via several flagship programs.

Collin Morikawa shows off the Wanamaker Trophy and the champion’s watch after winning the 2020 PGA Championship at TPC Harding Park in San Francisco. Morikawa was playing only his second career major championship, and in his first PGA.

rounds (65-64) was a championship record for the last 36 holes (Tiger Woods, 130/2018). The 64 tied the lowest final round by a winner (Steve Elkington, 1995).  Morikawa was the first player to make an eagle in the final round and go on to win the PGA Championship since Rory McIlroy (2014).  Dustin Johnson finished second for the second consecutive year at the PGA Championship, the first to do that since Jack Nicklaus (1964-65). Johnson has posted nine consecutive rounds in the 60s in the event. W W W.P GAT OUR.COM