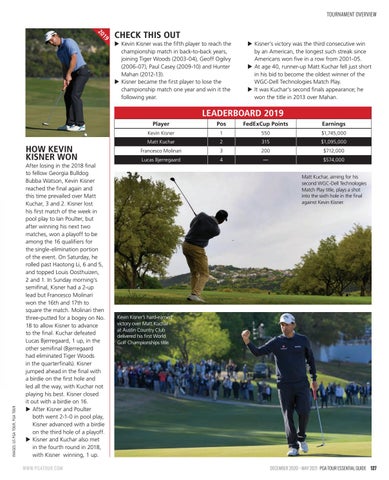  Kisner’s victory was the third consecutive win by an American, the longest such streak since Americans won five in a row from 2001-05.  At age 40, runner-up Matt Kuchar fell just short in his bid to become the oldest winner of the WGC-Dell Technologies Match Play.  It was Kuchar’s second finals appearance; he won the title in 2013 over Mahan.

HOW KEVIN KISNER WON After losing in the 2018 final to fellow Georgia Bulldog Bubba Watson, Kevin Kisner reached the final again and this time prevailed over Matt Kuchar, 3 and 2. Kisner lost his first match of the week in pool play to Ian Poulter, but after winning his next two matches, won a playoff to be among the 16 qualifiers for the single-elimination portion of the event. On Saturday, he rolled past Haotong Li, 6 and 5, and topped Louis Oosthuizen, 2 and 1. In Sunday morning’s semifinal, Kisner had a 2-up lead but Francesco Molinari won the 16th and 17th to square the match. Molinari then three-putted for a bogey on No. 18 to allow Kisner to advance to the final. Kuchar defeated Lucas Bjerregaard, 1 up, in the other semifinal (Bjerregaard had eliminated Tiger Woods in the quarterfinals). Kisner jumped ahead in the final with a birdie on the first hole and led all the way, with Kuchar not playing his best. Kisner closed it out with a birdie on 16.  After Kisner and Poulter both went 2-1-0 in pool play, Kisner advanced with a birdie on the third hole of a playoff.  Kisner and Kuchar also met in the fourth round in 2018, with Kisner winning, 1 up. W W W.P GAT OUR.COM

$574,000 Matt Kuchar, aiming for his second WGC-Dell Technologies Match Play title, plays a shot into the sixth hole in the final against Kevin Kisner.