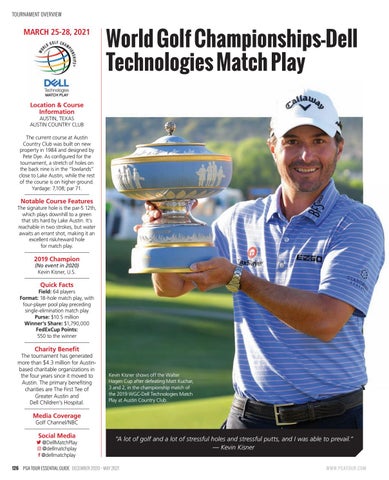 AUSTIN, TEXAS AUSTIN COUNTRY CLUB The current course at Austin Country Club was built on new property in 1984 and designed by Pete Dye. As configured for the tournament, a stretch of holes on the back nine is in the “lowlands” close to Lake Austin, while the rest of the course is on higher ground. Yardage: 7,108; par 71.

The signature hole is the par-5 12th, which plays downhill to a green that sits hard by Lake Austin. It’s reachable in two strokes, but water awaits an errant shot, making it an excellent risk/reward hole for match play.

The tournament has generated more than $4.3 million for Austinbased charitable organizations in the four years since it moved to Austin. The primary benefiting charities are The First Tee of Greater Austin and Dell Children’s Hospital.

Kevin Kisner shows off the Walter Hagen Cup after defeating Matt Kuchar, 3 and 2, in the championship match of the 2019 WGC-Dell Technologies Match Play at Austin Country Club.

“A lot of golf and a lot of stressful holes and stressful putts, and I was able to prevail.” — Kevin Kisner