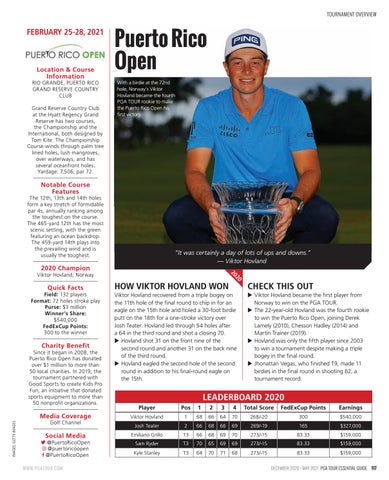 The 12th, 13th and 14th holes form a key stretch of formidable par 4s, annually ranking among the toughest on the course. The 465-yard 12th has the most scenic setting, with the green featuring an ocean backdrop. The 459-yard 14th plays into the prevailing wind and is usually the toughest.

“It was certainly a day of lots of ups and downs.” — Viktor Hovland

Since it began in 2008, the Puerto Rico Open has donated over $1 million to more than 50 local charities. In 2019, the tournament partnered with Good Sports to create Kids Pro Fun, an initiative that donated sports equipment to more than 50 nonprofit organizations.

Viktor Hovland recovered from a triple bogey on the 11th hole of the final round to chip in for an eagle on the 15th hole and holed a 30-foot birdie putt on the 18th for a one-stroke victory over Josh Teater. Hovland led through 54 holes after a 64 in the third round and shot a closing 70.  Hovland shot 31 on the front nine of the second round and another 31 on the back nine of the third round.  Hovland eagled the second hole of the second round in addition to his final-round eagle on the 15th.

CHECK THIS OUT  Viktor Hovland became the first player from Norway to win on the PGA TOUR.  The 22-year-old Hovland was the fourth rookie to win the Puerto Rico Open, joining Derek Lamely (2010), Chesson Hadley (2014) and Martin Trainer (2019).  Hovland was only the fifth player since 2003 to win a tournament despite making a triple bogey in the final round.  Jhonattan Vegas, who finished T9, made 11 birdies in the final round in shooting 62, a tournament record.