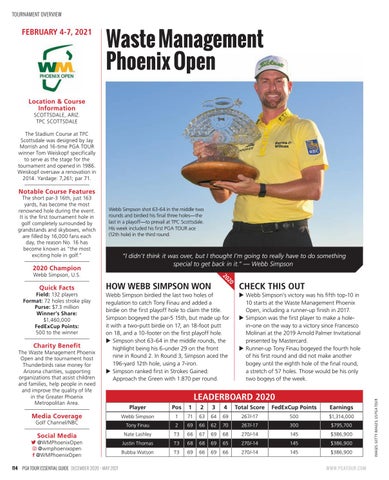 The Stadium Course at TPC Scottsdale was designed by Jay Morrish and 16-time PGA TOUR winner Tom Weiskopf specifically to serve as the stage for the tournament and opened in 1986. Weiskopf oversaw a renovation in 2014. Yardage: 7,261; par 71.

Webb Simpson shot 63-64 in the middle two rounds and birdied his final three holes—the last in a playoff—to prevail at TPC Scottsdale. His week included his first PGA TOUR ace (12th hole) in the third round.

“I didn’t think it was over, but I thought I’m going to really have to do something special to get back in it.” — Webb Simpson

The Waste Management Phoenix Open and the tournament host Thunderbirds raise money for Arizona charities, supporting organizations that assist children and families, help people in need and improve the quality of life in the Greater Phoenix Metropolitan Area.

Webb Simpson birdied the last two holes of regulation to catch Tony Finau and added a birdie on the first playoff hole to claim the title. Simpson bogeyed the par-5 15th, but made up for it with a two-putt birdie on 17, an 18-foot putt on 18, and a 10-footer on the first playoff hole.  Simpson shot 63-64 in the middle rounds, the highlight being his 6-under 29 on the front nine in Round 2. In Round 3, Simpson aced the 196-yard 12th hole, using a 7-iron.  Simpson ranked first in Strokes Gained: Approach the Green with 1.870 per round.

CHECK THIS OUT  Webb Simpson’s victory was his fifth top-10 in 10 starts at the Waste Management Phoenix Open, including a runner-up finish in 2017.  Simpson was the first player to make a holein-one on the way to a victory since Francesco Molinari at the 2019 Arnold Palmer Invitational presented by Mastercard.  Runner-up Tony Finau bogeyed the fourth hole of his first round and did not make another bogey until the eighth hole of the final round, a stretch of 57 holes. Those would be his only two bogeys of the week.

The short par-3 16th, just 163 yards, has become the most renowned hole during the event. It is the first tournament hole in golf completely surrounded by grandstands and skyboxes, which are filled by 16,000 fans each day, the reason No. 16 has become known as “the most exciting hole in golf.”