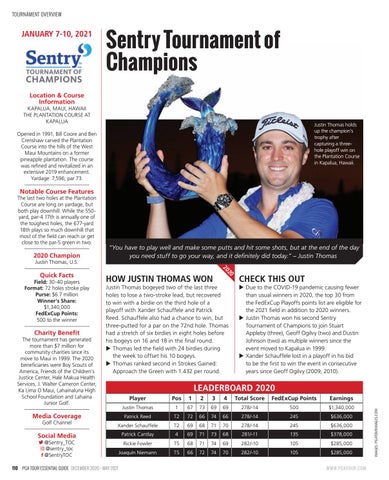 Justin Thomas holds up the champion’s trophy after capturing a threehole playoff win on the Plantation Course in Kapalua, Hawaii.

Opened in 1991, Bill Coore and Ben Crenshaw carved the Plantation Course into the hills of the West Maui Mountains on a former pineapple plantation. The course was refined and revitalized in an extensive 2019 enhancement. Yardage: 7,596; par 73.

Justin Thomas bogeyed two of the last three holes to lose a two-stroke lead, but recovered to win with a birdie on the third hole of a playoff with Xander Schauffele and Patrick Reed. Schauffele also had a chance to win, but three-putted for a par on the 72nd hole. Thomas had a stretch of six birdies in eight holes before his bogeys on 16 and 18 in the final round.  Thomas led the field with 24 birdies during the week to offset his 10 bogeys.  Thomas ranked second in Strokes Gained: Approach the Green with 1.432 per round.

 Due to the COVID-19 pandemic causing fewer than usual winners in 2020, the top 30 from the FedExCup Playoffs points list are eligible for the 2021 field in addition to 2020 winners.  Justin Thomas won his second Sentry Tournament of Champions to join Stuart Appleby (three), Geoff Ogilvy (two) and Dustin Johnson (two) as multiple winners since the event moved to Kapalua in 1999.  Xander Schauffele lost in a playoff in his bid to be the first to win the event in consecutive years since Geoff Ogilvy (2009, 2010).

“You have to play well and make some putts and hit some shots, but at the end of the day you need stuff to go your way, and it definitely did today.” – Justin Thomas

The last two holes at the Plantation Course are long on yardage, but both play downhill. While the 550yard, par-4 17th is annually one of the toughest holes, the 677-yard 18th plays so much downhill that most of the field can reach or get close to the par-5 green in two.