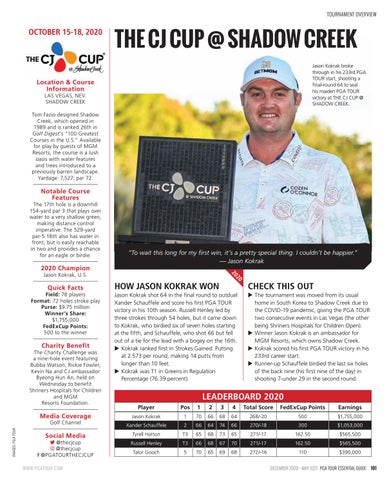 Tom Fazio designed Shadow Creek, which opened in 1989 and is ranked 26th in Golf Digest’s “100 Greatest Courses in the U.S.” Available for play by guests of MGM Resorts, the course is a lush oasis with water features and trees introduced to a previously barren landscape. Yardage: 7,527; par 72.

The 17th hole is a downhill 154-yard par 3 that plays over water to a very shallow green, making distance control imperative. The 529-yard par-5 18th also has water in front, but is easily reachable in two and provides a chance for an eagle or birdie.

“To wait this long for my first win, it’s a pretty special thing. I couldn’t be happier.” — Jason Kokrak

Jason Kokrak shot 64 in the final round to outduel Xander Schauffele and score his first PGA TOUR victory in his 10th season. Russell Henley led by three strokes through 54 holes, but it came down to Kokrak, who birdied six of seven holes starting at the fifth, and Schauffele, who shot 66 but fell out of a tie for the lead with a bogey on the 16th.  Kokrak ranked first in Strokes Gained: Putting at 2.573 per round, making 14 putts from longer than 10 feet.  Kokrak was T1 in Greens in Regulation Percentage (76.39 percent).

CHECK THIS OUT  The tournament was moved from its usual home in South Korea to Shadow Creek due to the COVID-19 pandemic, giving the PGA TOUR two consecutive events in Las Vegas (the other being Shriners Hospitals for Children Open).  Winner Jason Kokrak is an ambassador for MGM Resorts, which owns Shadow Creek.  Kokrak scored his first PGA TOUR victory in his 233rd career start.  Runner-up Schauffele birdied the last six holes of the back nine (his first nine of the day) in shooting 7-under 29 in the second round.