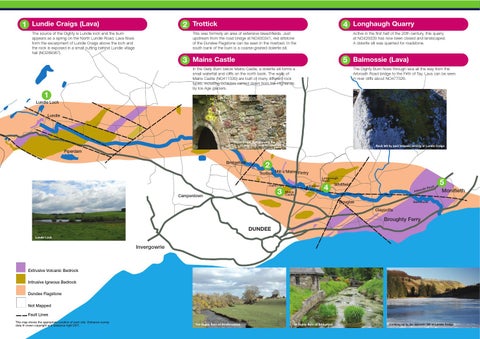 The source of the Dighty is Lundie loch and the burn appears as a spring on the North Lundie Road. Lava flows form the escarpment of Lundie Craigs above the loch and the rock is exposed in a small cutting behind Lundie village hall (NO289367).

This was formerly an area of extensive bleachfields. Just upstream from the road bridge at NO400341, red siltstone of the Dundee Flagstone can be seen in the riverbed. In the south bank of the burn is a coarse-grained dolerite sill.

Active in the first half of the 20th century, this quarry at NO429330 has now been closed and landscaped. A dolerite sill was quarried for roadstone.

The Dighty Burn flows through lava all the way from the Arbroath Road bridge to the Firth of Tay. Lava can be seen in river cliffs about NO477326.

In the Gelly Burn below Mains Castle, a dolerite sill forms a small waterfall and cliffs on the north bank. The walls of Mains Castle (NO411330) are built of many different rock types, including boulders carried down from the Highlands by Ice Age glaciers.

Rock left by past Volcanic activity at Lundie Craigs

The Dighty Burn at Bridgefoot

Looking up to the Volcanic Sill at Lundie Craigs

For more information please contact: Ann on 01382 436932 or environ.project@dundeecity.gov.uk or Jane on dightyconnect@yahoo.co.uk DightyConnect, a confluence of people and nature, DightyConnect is a volunteering project enabling local people living along the banks of the Dighty to be involved in environmental and cultural projects connected to the Burn.

This document has been printed on environmentally responsible paper in accordance with the rules of the Forest Stewardship Council.

We would like to thank Dr Carole Pudsey for providing the technical information and Leslie Reeves for the generation of the idea for the leaflet. Devonian scene image copyright Richard Bizley. Photography kindly supplied by Aaren Chacko, David Shand Michael Hambrey and Carol Pudsey. Computer-generated map of the Dundee area showing the land streamlined by ice flowing west to east. The dark blue line is the Dighty Burn.

DightyConnect Keep collecting to a minimum Try not to hammer: if so wear googles - better with fragments Seek permission to go onto private land Do not dig out any site - leave it as it was found Do not leave rock fragments as litter on roads or fields Do not disfigure rocks Leave things so people after you can enjoy them Follow the Scottish Outdoor Access Code Wear hard hats for unstable rock above you Use common sense

DO YOU LIVE ON A LAVA FLOW? Igneous

About 400 million years ago Scotland was part of a large continent located in the tropical zone south of the Equator. To the northeast were high mountains and a huge river flowed southwest through the Dundee area. Sand, silt and mud from the river and nearby lakes are now sandstone and flagstone, some with fossil plants and fish.

300-2.5 Lava was erupting from volcanoes and fissures, spreading out across the land surface. Molten rock (magma) cools quickly at the surface and forms crystals too small to see. The rock looks grey and even-grained, sometimes with bubbles if there was gas in the magma. Some magma didn’t make it to the surface but was squeezed between older layers of rock to form a sill. A sill cools more slowly and the crystals are big enough to see.

Starting about 2.5 million years ago. Scotland was covered again and again by ice sheets. The ice eroded the mountains of the Highlands and carved out deep valleys. In the lowlands the land was smoothed and streamlined. When the ice last melted 20,000 years ago it left thick layers of till - a mixture of stones, sand and mud.

A view from the Lundie Craigs

No geological record in

Eroded and deposited till.

This is a general name to cover all earth movements, from tectonic plates moving round the Earth to faults you can see in a rock outcrop. The Dundee flagstones and lavas, along with the sills, were gently folded and tilted, then broken by faults.

You can walk along the Dighty Burn, or look down to its valley from the braes above, and see these features yourself. Do You Live on a Lava Flow?

Do You Live on a Lava Flow?