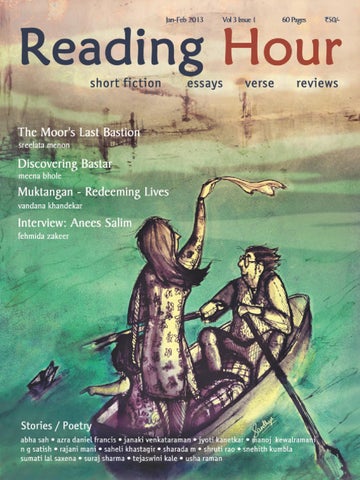 Published, owned, and printed by Vaishali Khandekar, and printed at National Printing Press, 580, KR Garden, Koramangala, Bangalore-560095 Published at 177-B Classic Orchards, Bannerghatta Rd, Bangalore-560076 Editor: Vaishali Khandekar Editing Support: Arun Kumar, Manjushree Hegde Subscriptions, business enquiries, feedback: readinghour@differsense.com Subscription Details: Print (within India only) or Electronic (PDF): Annual subscription Rs. 300/- (6 issues) 2 years subscription Rs. 600/- (12 issues) Payment via cheque / DD in favour of ‘Differsense Ventures LLP’ payable at Bangalore. Subscription form elsewhere in this issue. Online subscription: readinghour.in Submissions: editors@differsense.com Advertisers: Contact Arun Kumar at arunkumar@differsense.com / +91 98450 22991 Cover Illustration & Design: Sandhya Prabhat Illustrations: Raghupathi N S Disclaimer: Matter published in Reading Hour magazine is the work of individual writers who guarantee it to be entirely their own, and original work. Contributions to Reading Hour are largely creative, while certain articles are the writer’s own experiences or observations. The publishers accept no liability for them. Opinions expressed by our contributors do not necessarily represent the policies or positions of the publisher. The publishers intend no factual miscommunication, disrespect to, or incitement of any individual, community or enterprise through this publication. Copyright ©2012-2013 Differsense Ventures LLP. All rights reserved. Reproduction of any part of this issue in any manner without prior written permission of the publisher is prohibited.

Editorial I have always been delighted at the prospect of a new day, a fresh try, one more start, with perhaps a bit of magic waiting somewhere behind the morning. ~ J. B. Priestly Who hasn’t felt that irrepressible hope at the start of a new year, that this year will be the one, this year I’ll make that milestone, I’ll set my life in order, I will make a difference? January is when, like the two-headed Janus, we look both backward and forward, to bid farewell to the year gone by and to welcome the year ahead. Rather like the little family in their boat on the cover! Here’s wishing all our readers success with their plans for the coming year. We profile in this issue a pioneering philanthropist couple from Pune – the Awachats – whose de-addiction centre Muktangan was one of the first of its kind when it began; and it began with little more than hope and compassion. Spain, and its Moorish heritage comes alive for us through the eyes of indefatigable traveller Sreelata Menon. As does the green state of Chhattisgarh in Meena Bhole’s account of a holiday to remember. Writer Anees Salim who is having four novels published in rapid succession after a two decade wait, chats with Fehmida Zakeer about keeping alive the dream. Then the story writers spin an engaging set of yarns. We have a young girl fascinated by a pair of ordinary red shoes, and the strange outcome of that fascination. There’s orphan Molly, who strives for order in her troubled world and finds beauty in fractals and hexagons. Prey to a magnificent obsession is Kaushik, whose close confidante turns chronicler as the obsession runs its course. So does the master’s keeper chronicle the saga of a life lived on a stage. At the turn of a new year a mother looks forward to winning over a distanced daughter and a son sends his mother a surprise gift from a far off country. We hope you enjoy the selection of poems too. Happy reading dear readers, and a very happy New Year. Editors facebook.com/readinghour readinghour.in 1

12 Waves in the Wind

27 The Geometry of Escape

35 Anatomy of a Miracle

54 The Golden Age of Silverfish

47 The Only Cure azra daniel francis

Cover Design by Sandhya Prabhat. Sandhya (sandhyaprabhat.com) is a Freelance Animator/Illustrator with a Master of Fine Arts degree in Animation and Digital Arts from NYU Tisch School of the Arts Asia.

Get Reading Hour delivered to your doorstep! Subscribe using the form on page 49, or visit http://readinghour.in. 2

e died today. His body is concealed beneath a mound of moist dirt in the city of his birth. It lies deep, deep down in a cold pit I dug

within the cave that was carved into this rock years ago. I am not good with irony, but perhaps it lurks here somewhere...

He’d part waters and lift mountains with his little finger. Burn cities and create new ones in the midst of nowhere.

Manoj is a journalist/author based in Mumbai. His latest book, Fairy Tales: Love, Hate and Hubris, is a poetic retelling of classic fairy tales from the antagonists’ perspective.

n my experience, a love for nature pays for itself many times over and

in many ways. A fine example of this is Manik Deshmukh whom I first met some years ago at a bird-watchers conference, and who is today one of my dearest friends...

Meena is based in Pune. She is a trained nurse, talented seamstress, and marvellous cook who feeds soft chapati every day to a pair of hornbills on her balcony. The photographs have been taken by Manik Deshmukh, a self-taught photographer and keen conservationist working for the survival of the Saras crane.

hagi’s son, Girish, sent her a wind chime from Japan. It came as a

complete surprise. For one thing, Bhagi had not heard from Girish in over a year. He worked as a photo journalist for the National Geographic magazine and always seemed to be in some remote, strange-sounding place where communication facilities were probably primitive. He rarely called her...

Janaki is a freelance writer based in Chennai. She is currently working on a novel but she loves the short story format. 5

Anatomy of a Miracle jyoti kanetkar

The Only Cure azra daniel francis

Saheli is pursuing her Masters’ in psychology from Delhi University. She paints and writes to make sense of the strange and the ordinary. Her poems have appeared in Eye on Life Magazine, Haggard and Halloo and Mad Swirl.

Snehith is a writer, poet and lyricist currently based in Pune. Now into table tennis, trekking and photography, he is still a potential jogger.

Dr. Satish is a librarian and researcher on scientometrics. He aspires to be a better painter.

Usha is head, Dept. of Communication, Univ. of Hyderabad, editor of Teacher Plus and author of “All the spaces in between” (poetry, Writers Workshop, 2010)

Jyoti is a counsellor and writer in Pune. She has won the 2001 CBA short fiction award, and the 2005 Vyankatesh Madgulkar award (Marathi).

Tejaswini works with government schools in Rajasthan. She has studied Literature in Mumbai, from SNDT University. She writes poetry. Azra is a poet based in Toronto and dabbles in various poetic forms. This is one from his ‘perfect iambic’ collection.

A 24-year-old literature postgraduate from JNU Delhi, Shruti works as a copy-editor. A published poet and reviewer, she is also Books Editor at the online magazine, Helter Skelter.

ditya had called. He is ecstatic about being posted

to Delhi. He has been allotted a well maintained house and wants the entire family to gather for Diwali at his new place; I find this suitable. My own body is slowing down now, and I am ashamed that sometimes I feel the children’s coming a burden...

Sumati began writing in 1967. From 1969-72 she was published in all the top literary Hindi magazines. A long break followed; she resumed writing in 2005 and has since been writing prolifically to make up for lost time. This story is translated by Abha Sah from the Hindi original Visthapit. Abha is a retired teacher of English and a freelance translator.

Mango Tree (Harper Collins, 2012) has three other books in the publishing pipeline. For a writer who claims that his ultimate goal in life was to have a few short stories published, it is an impressive tally. Apparently, a rejection letter put paid to his short story writing but thankfully it did not kill his itch to write.

Fehmida is a writer based in Chennai. She has been published in several online and print magazines.

olly walks into the apartment and sets

the pale yellow plastic bag on the dining table. From the bag she pulls out the precious Chinese Gobi her subziwaala1 had saved for her. Chinese Gobi, thatâ&#x20AC;&#x2122;s what he had called it. She wanted to tell him, dear friend, few things are more mesmerising than a Romanesco cauliflower...

Filmmaker, illustrator and lazy mum with more than a passing interest in all things food, when not in the kitchen Rajani spends her time spinning yarn in her tiny sun fed home in Dubai.

is a centre for the

rehabilitation of addicts, one of the first of its kind at the time it was founded. Muktangan is also the story of its founders the Awachat couple, Anil and Sunanda, and their selfless efforts to help addicts and their families make a new beginning in their lives. Muktangan is a symbol too, of true conviction, dedication and integrity.

Vandana lives in Pune, where she keeps herself busy with her family (including one very bad dog) and the cultural scene.

Reviews Are you reading this?

Shikha is a scrabble enthusiast and freelance writer.

Sastry enjoys writing with a contemporary context. His stories have won competitions and been published by Unisun.

he shoes. There was something about the red shoes... something irresistible, almost sinister. They drew her closer and closer, till the

tip of her nose was pressed up against the glass of the display. They were ordinary enough, just a pair of red canvas shoes. Pretty, casual, barely worth a second look... ... she restrained herself from breaking into a run, at least until she got to the edge of the woods. And then there was nothing to stop her.

Sharada is a veterinary graduate working out of Mumbai who indulges a creative streak in her free time.

hou dost weep like a woman for what thou

couldst not defend as a man – said his mother to a tearful Emir Muhammad XIIth of Granada, as he, from a spot known today as the ‘Moor’s last sigh’ looked down at his Kingdom for the last time, before going on exile to Morocco. Her words, cutting as they were, effectively described how 700 years of Moorish rule was brought to an abject end...

A much travelled freelance writer who writes on anything and everything, Sreelata has published with Pengin/Puffin, among others. Photos: Courtesy Sreelata Menon

hey say our whole life flashes before our eyes as we are dying. They must be wrong because human memory isn’t that flawless and the

dying person is usually pressed for time. Apart from a few important moments, the greater part of our mundane lives is not significant enough to be recalled in its entirety even at events as ominous and final as death...

Born in Simla, Suraj is presently a civilservant working for Employee’s State Insurance Corporation. Published in Chowk and The Silent Ballet, he blogs at surajsharma.blogspot.com. A great variety of short fiction and poetry; an interview with author Anees Salim; short travelogues on Spain (Granada) and Bastar; and much...

A great variety of short fiction and poetry; an interview with author Anees Salim; short travelogues on Spain (Granada) and Bastar; and much...