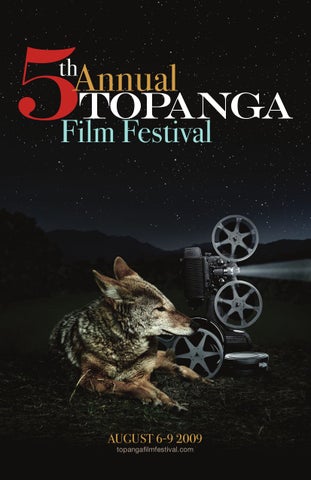 To do a film festival in the face of these difficult times may be foolish but it has been extremely gratifying, despite the obvious obstacles. The record number of submissions, the enthusiasm in the community and the willingness of friends and volunteers to get behind the cause, have helped us persevere and believe. In fact, you showed us that in the end it’s all quite simple: That if you create the space, and light a fire, the storytellers will follow—and so will those who like to listen, and those who like to share. Welcome to the 5th Annual Topanga Film Festival.

A night of harrowing action, not for the faint of heart. 7:00pm - Reception 8:30pm - Screening (approx. 120 minutes) with MC Billy Portman 10:30pm - People’s Choice Award for Best Film (approx. 15 minutes) 10:45pm - U nderworld Cinema: Life and Work of J.X. Williams (approx. 30 minutes) On the run (2:00) Directed by Stefan G. Bucher Music by Simone Giuliani A Daily Monster salute to the Topanga Film Festival. roland SUMILE (4:01) Directed &amp; Produced by Bart Saric A Smell The ’Crete Production A 44 year old legend explains why he still charges on his skateboard at 50+ MPH.

This short documentary set in 1989 NYC captures an urban rite of passage defined by all-night stakeouts, the rush of adrenaline, and the recklessness of adolescence. ‘MARK MAHONEY’ (3:20) Directed &amp; Produced by Bart Saric A Skinned Alive Production The definition of ‘old school tatooing’, and a master of single needle art, this man and his art have become symbiotic with skateboard culture. stand (1:56) Directed &amp; Produced by Chris Davison A woman takes a stand. the night life (5:00) Directed by Lee Arter After a one night stand a young man discovers he’s been transformed. Aesthetica (5:00) Directed by Travis Robb Produced by Waide Hoyt / Standard Films Torston Horgmo makes a scene. people’s choice award (15:00) underworld cinema: life and work of J.X. Williams (30:00) J.X. Williams was a legendary bottom-of-the-barrel director in the fifties and sixties. Tonight, film curator and archivist Noel Lawrence will share a few of the surviving artifacts of Williams’ tawdry career.

PROUDLY SUPPORTING OUR FRIENDS AT THE TOPANGA FILM FESTIVAL

Feature Showcase “What About Me?” Presented in conjunction with Project Butterfly at Trust Ranch on the Mesa

From the Creators of the Grammy-nominated film and album 1 Giant Leap, this visionary project took Jamie Catto and Duncan Bridgeman to over 50 locations. Through music, they explore the complexities of human nature on a global scale, and reveal how we are all connected through our creativity and beliefs, but most of all through our collective insanity. Featuring, Eckhart Tolle, Lila Downs, Michael Stipe, Carlos Santana, KD Lang, Baba Maal and so many more.

for its 5th Anniversary.

A selection of groundbreaking short films that explore the possibilities of storytelling at all levels—documentaries, animation, drama, comedy and experimental. 5:00pm - G ates Open 5:30pm - DJ Glenn Red (Afro Funke) / Food / Bar 8:30pm - Screening (approx. 120 minutes) with MC Billy Portman WRITERS MINI BOOTCAMP WORKSHOP 5:30-6:30pm at the Topanga Community House (Main Location) Hosted by Writers Bootcamp founder Jeffrey Gordon. Free career counseling with a WBC Coordinator is offered both before and after the event. Participants walk away from a Mini-Camp with tools they can immediately apply to their writing process.

READING: FIND YOUR STORY 6:45-7:45pm at the Topanga Community House (Main Location) The culmination of the two day workshop by Wendy Hammers where participants met to “steal from their life” and find a story. Tonight they’re ready to share.

SEBASTIAN’S VOODOO (5:00) Directed &amp; Produced by Joaquin Baldwin Music by Nick Fevola A voodoo doll must find the courage to save his friends. THESE BOOTS ARE MADE FOR WALKEN (24:00) Directed by Jeremy Pack Produced by Christopher Gourlay Written by Jude Bass Jilted by love, Ronnie commits himself to a mental institution believing he is Christopher Walken. INTERMISSION (15:00)

THE STRANGE REBIRTH OF ANDRE WEIL (16:00) Directed &amp; Written by Joel Garber Produced by Joel Garber, Milenkeo Skoknic &amp; Summre Gaston Inspired by a true story of an average guy who meets the girl of his dreams but finds God. THEY CAME TO ATTACK US (4:00) Directed &amp; Written by Kyle Rankin &amp; Efram Potellee This could really happen folks! VAUDVILLIAN (16:00) Directed by Bryan Nest Produced by Amanda Ellis A performer’s conscience is tested by his own hunger during the Depression Era.

ON THE RUN (2:00) Directed by Stefan G. Bucher Music by Simone Giuliani A Daily Monster salute to the Topanga Film Festival. The last dragon kingdom (6:53) Directed by Aine Carey &amp; David Emery Produced by Aine Carey &amp; David Emery A visual journey through the ancient Kingdom of Bhutan. Neil heddings ‘sk8 junkee’ (6:07) Directed by Bart Saric A Skinned Alive Production Neil sheds light on the stigma of being a tattooed skateboarder and of the cross-over lifestyle, two days before going to prison for a crime he didn’t commit.

dasvedanya (9:00) Directed by Anastasia Fite The filmmaker observes her grandparents, Russian immigrants in their nineties, as they reflect on their 70 years together.

THE kiss of the lark (11:00) Directed by Ishan Shapiro Produced by Mette Lilleby &amp; Ishan Shapiro A boy is torn between following his father’s Hare Krishna practice and his mother’s Catholicism. In French with English subtitles.

jury hawk koch Hawk comes to the Topanga Film Festival with over four decades of professional experience. Some of his producer credits include Losing Isaiah, The Pope of Greenwich Village, Gorky Park, Wayne’s World, Primal Fear and Heaven Can Wait, for which he won a Golden Globe for Best Picture. When he’s not producing or accepting awards he’s probably relaxing at his beautiful home in Topanga. Patricia cardoso Topangan Patricia Cardoso came to the US from Bogata, Columbia as a Fulbright Scholar. She has worked for the Sundance Institute and has developed features for Universal, Disney, Ciby 2000 and Open City Films. She directed the HBO feature Real Women Have Curves, which won the Audience Award at the Sundance Film Festival and debuted America Ferrera. Her award-winning films have shown at festivals all over the world. dennis hAysbert This honorary Topangan is never afraid to take on a challenge. He showed his stuff as President David Palmer on 24, which earned him a Golden Globe nomination, and as the star in the hit show The Unit, which prepared him perfectly for his role as a judge tonight. Most recently he has been seen on the big screen in Breach opposite Ryan Phillppe, and in the Sam Mendes film Jarhead. His many film credits include, Far From Heaven, Love and Basketball, Waiting to Exhale and Suture. brendan o’brien Brendan is a screenwriter and producer and most recently co-produced Judd Apatow’s Funny People, starring Adam Sandler, Seth Rogen, Leslie Mann and Jonah Hill. His film American Storage won him the 2007 Coveted Coyote Award along with Andrew Jay Cohen. Brendan only comes to Topanga every other year. To judge, and be judged. Ronnie Yeskel As a leading casting agent in Hollywood, some of her favorite projects have included Reservoir Dogs, Pulp Fiction, L.A. Law and Curb Your Enthusiasm. She is currently working on Zen Dog with director Gillian Armstrong and W.H. Macy. Ronnie is a Topanga resident for all of a week.

An early supporter of the Topanga Film Festival

A BIG THANK YOU TO ALL OF OUR VOLUNTEERS, ESPECIALLY: Billy Portman

And special thanks to Patricia &amp; Tom Harding

To Pacific Coast Highway / The Ocean

A short ﬁlm by 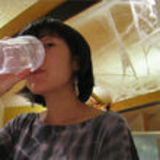